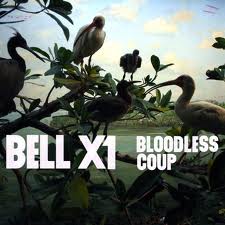 Bell X1 have just announced an Irish tour for December and will release a new single “Sugar High” ahead of that on 25th November – the third single to be taken from the album Bloodless Coup, which was released in April of this year.
After a summer of big marquee and festival shows including the Galway Arts Festival, Marley Park, Sea Sessions, Cork Marquee and a rooftop show for Facebook, Bell X1 are going back to basics for their winter dates.
Special guest for all the tour dates will be Jape, who’s new album Ocean Of Frequency and live shows are currently enjoying some great reviews all round.
Bell X1 are off to New York in October to take part in Other Voices NYC, which takes place at Le Poisson Rouge on 27th and 28th (along with Aaron and Bryce Dessner, Laurie Anderson, Doveman, Glen Hansard, Joseph O'Connor and Colum McCann). Then, it’s back to the US in November for their second headline tour of the year. There’s also another UK tour in December lined up, so they’ll be in fine form on their return for the Irish shows.
Talking about the background to “Sugar High”, Paul Noonan says:
"Ireland is, in ways, a microcosm or concentrated dose of the madness that has us all sloshing around in the shit. The song began as a debauched HR Giger vision of the Fianna Fáil tent at the Galway Races, with all the boys out of their minds, riding each other…on a Sugar High."
Tour Dates
Thurs Dec 1 – The Forum, Waterford
Fri Dec 2 – Big Top, Limerick
Sat Dec 3 – Black Box, Galway
Sat 10 Dec – Savoy, Cork
Thurs Dec 15 – Nerve Centre, Derry
Fri Dec 16 – Mandella Hall, Belfast
http://main.bellx1.com/
Latest News