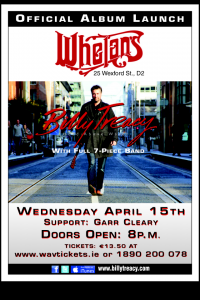 Dublin singer-songwriter, Billy Treacy, releases his new album, “Head Above Water”, tonight at Whelans, Dublin. The album is a collection of modern day folk songs from Billy, who was first introduced to folk music growing up over a pub in Dublin’s City Centre.

The most recent single from the album, “Temple Bar”, was a tongue-in-cheek look at Dublin’s cultural quarter, while “Woe!”, his commentary on families struggling financially in Ireland today, became a viral hit on its release.

Self-released, the album has been a couple of years of hard work in the making. Billy describes it as both a personal soundtrack and a mix of protest songs, love songs and observations of life around him.

He will be performing with a 7-piece band in Whelans tonight.