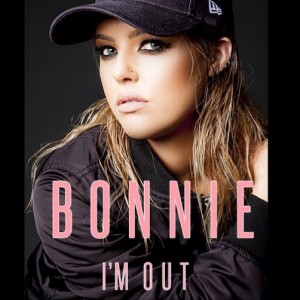 Bonnie’s long-awaited new single ‘I’m Out’ co-written with iconic Irish singer-songwriter Don Mescall will be released on 20th May 2016 (pre-orders from 13th May).

Bonnie is no stranger to the Irish Showbiz world. Aged just nine, she joined her first girl-band Lady Nada. They would go on to support Westlife on their Face-To-Face and Love tours, and X-Factor winner Shayne Ward on his debut Irish tour. In 2007 Bonnie and Lady Nada performed centre-stage at the annual Childline Cheerios concert in Dublin.

“I grew up in a family full of people who are singers, dancers, acting, radio, all this stuff so I don’t think it’s too surprising that it rubbed off on me or I gravitated towards it.” Bonnie (Apr 2016).

After leaving the group, Bonnie decided to pursue a solo career in music, studying music, songwriting and dance at the Ballyfermot School of Music. She would also study further dance at the Broadway Dance Centre in New York.

Bonnie’s new single, ‘I’m Out’ is a co-write with songwriter Don Mescall, who has written in the past for artists as diverse as Backstreet Boys, Lonestar, Rascal Flatts, Ronan Keating, Aslan, Shane Filan and Marina Kaye. Collectively Don Mescall’s songs have generated sales of over 16 million worldwide.

‘I’m Out’ was produced at the Dreamhill Studios in Stockholm, Sweden and the Pepper Pot Studios in London, England.

‘I’m Out’ debuted on the Tracy Clifford Show on RTE 2FM last week, and received it’s first TV airplay on The Ray D’Arcy Show on RTE1 on Saturday evening. The accompanying video has received over 69k hits on YouTube in 5 days.

For further info, check out www.bonnieofficialmusic.com