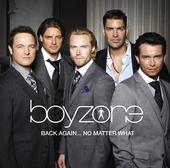 Boyzone plan to release a new album in 2010 as a tribute to Stephen Gately, the band told Sky News in their only interview since the singer’s death.

The album will include two tracks that Gately had already recorded his vocals for. “We have a few songs with Stephen’s voice – what a rescue,” says Ronan. “The fans will really appreciate it.” He also says that Stephen was looking forward to the album the band was planning before his death: “He was so excited about this, he actually texted me just before he went out on the night he died and said he couldn’t wait to get started. I had never seen Stephen so full of life, so happy, so healthy and just so alive. That’s what’s making his death all the harder for us.”

Completing the record is helping Boyzone cope, says Ronan. “The band will take comfort in being together as they complete the album. We’re spending a lot of time sticking together because it is helping us to deal with our grief.”
At IMRO, we extend our condolences to Stephen’s family, friends and loved ones.