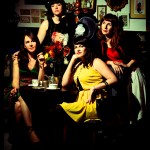 Following widespread media acclaim for the all-female vocal compilation album titled ‘Café Irlandaise’, a selection of the independent artists who feature on it, are delighted to announce their first Irish tour together in August.

Their preferred styles include electronica, alternative pop, baroque, ambient, experimental and folk. The ladies hail from various parts of the island; their passion and talent captured in their song writing.

With a mix of solo artists, duos and bands – this promises to be a delightful and charming night. Bona Fide Federation, Sí, Foxglove and In Valour are just some of the acts that plan on wooing audiences with their extraordinary voices and beautiful melodies. They will be joined at various stages of the tour by Laura Sheeran, Odi and Sive.

The 10-track ‘Café Irlandaise’ compilation album was released as a free download earlier this year on http://www.cafeirlandaise.com/