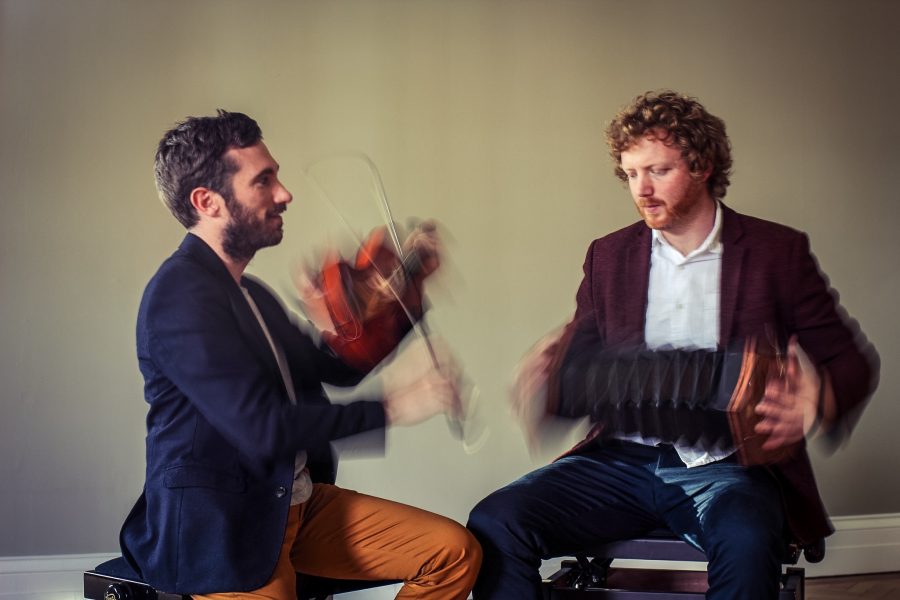 The pair recently performed together as part of Ó Raghallaigh’s residency in the stunning Kevin Barry room at the National Concert Hall. They share a common interest in the traditional music of both Kerry and Clare, and both have an approach to music that revels in repetition and a deep meditative engagement with each tune.

Ó Raghallaigh’s distinctive sound can be traced back to an early interest in both the sound of the flat-pitch uilleann pipes and a love for the traditional music of Kerry and Clare. Twelve albums to date: solo, duos, trios, and with bands This Is How We Fly and The Gloaming. He has performed on some of the most beautiful stages in the world, including the Sydney Opera House, the Royal Albert Hall and the Lincoln Center.

Cormac Begley is a bass, baritone, treble and piccolo concertina player from a West-Kerry musical family. He is founder of Airt and award winning Tunes in the Church concert series in Galway and Dublin. In 2014, he received the Seán Ó Riada Award for concertina playing.  To date, he has featured on three acclaimed recordings – the first with fellow concertina player, Jack Talty (‘Na Fir Bolg’), the second (‘Tunes in the Church’), featuring his sister, Clíodhna (viola) and Páraic Mac Donnchadha (banjo), and third, Ré, featuring Liam Ó Maonlaí, Maitiú Ó Casaide, Eithne Ní Chatháin and Peter O’Toole.

Throughout the concert, the pair play a number of very unusual instruments that extend the musical and sonic range available to them: bass, baritone and piccolo concertinas combining with a 10-string hardanger d’Amore fiddle and Dali-esque 5-string viola.

Tickets for all shows go on sale this Wednesday (15) at 10am. Tour website www.irishmusic.net/CC/