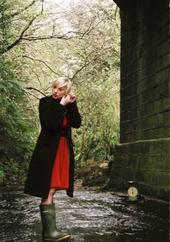 Cathy Davey´s new album The Nameless has gone straight in at No.1!!

In April this year, Little Red, set the tone for what was to come. The first release from Cathy Davey following her departure from EMI, the single still nestles at the top of the Irish Airplay Chart thanks to the support of the radio community and the critics who lauded it as the best thing she’s done in her career to date.

Now, The Nameless, her new album has entered the Album Chart at # 1! An achievement we believe needs to be both heralded and welcomed as it’s not often an independently-released, Irish artist sits atop this particular chart. But thanks again to an enormous swell of critical acclaim and the aforementioned radio support she has comfortably swatted the opposition – including the combined might of AC/DC and Iron Man!

#1 Itunes
Reviews of The Nameless: