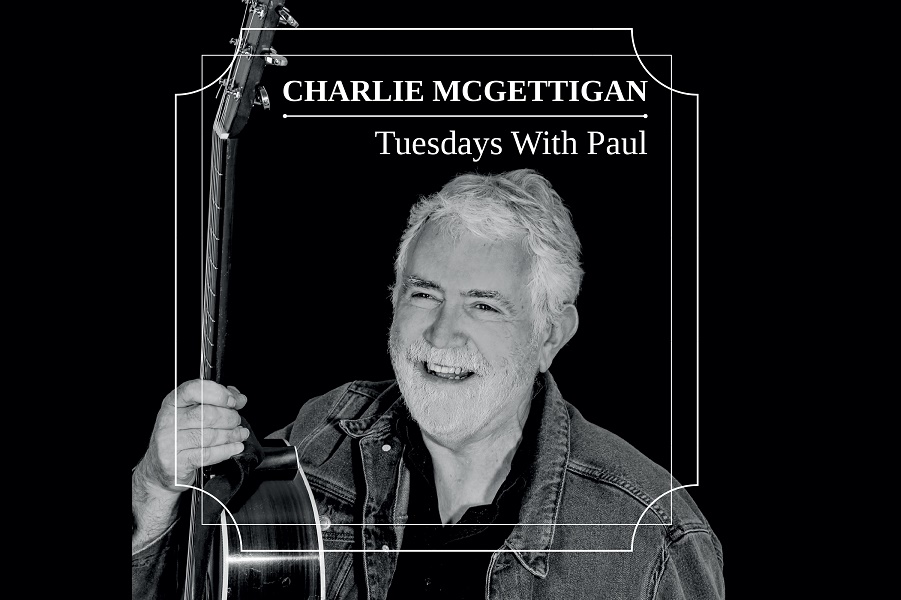 Charlie McGettigan is one of the foremost singer-songwriters Ireland has ever being blessed to call one of our own. Indeed, the release of his new album, ‘Tuesdays With Paul’, this year will mark 50 years since Charlie moved to Dublin to be part of the thriving folk scene establishing itself in the city at that time.

‘Tuesdays With Paul’, is released today, Friday 23rd March.  The album is being distributed by Warner Music Ireland and will be available to purchase via mail order from the shop on both warnermusic.ie and Charlie’s own website charliemcgettigan.ie together with Golden Discs and many other independent stores nationwide.

Recorded with his good friend Paul Gurney at Real World Studios in Longford, the guys would meet on Tuesdays to chat about the album, in pre-production, and then record.  It was a special time, with friends coming together to make a record both are equally proud of.  ‘Tuesdays With Paul’ was mastered by Billy Farrell at Dead Eye Productions.

The new single is Track 5 from the new album, ‘When I Was A Kid’.  Of the song Charlie says “I, and even my own children seemed to have lots of freedom growing up.  These days it seems to me my grandchildren live very protected lives because of a paranoia / fear of what’s out there”.

Charlie’s songs have been recorded by many including De Danann, Mary and Frances Black, Ray Lynam, Daniel O’Donnell, Sandy Kelly, Hal Ketchum, Eleanor Shanley and Maura O’Connell to name but a few.

Some of Charlie’s live shows have included touring with good friends, Maura O’Connell and Eleanor Shanley amongst others. However, there is no escaping probably Charlie’s best-known performance, The 1994 Eurovision Song Contest in Dublin.  It was one of those “do you remember where you were, what you were doing moments” when Charlie joined forces with Paul Harrington to win the 1994 Eurovision Song Contest, with Brendan Graham’s, Rock n Roll Kids.  He has released nine solo albums including ‘In Your Old Room’, ‘Family Matters’, ‘The Man From 20’ and ‘Stolen Moments’ produced in Nashville by legendary producer Bil Vorndick.

These days Charlie tours both here in Ireland and abroad.  He presents “The Saturday Connection” and “The Arts Show” on Shannonside / Northern Sound Radio, where he previews live music and theatrical events, interviews guests from the world of arts and entertainment and plays an eclectic mix of music and song on CD.  Together with serving on the Board of IMRO, Charlie is also a member of the Board of The Dock Arts Centre in Carrick on Shannon, Co. Leitrim.  Charlie moved to Co. Leitrim in 1973, this is where he calls home.

‘Tuesdays with Paul’ is out now.

Full track-listing and composer credits of ‘Tuesdays With Paul’