The Contemporary Music Centre, in association with the National Chamber Choir of Ireland and Association of Irish Choirs, this week publishes Choirland – An Anthology of Irish Choral Music. 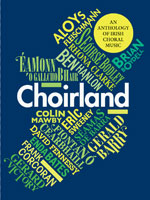 The book is a collection of 15 pieces by Irish composers for unaccompanied mixed choir. The pieces have been selected with the intention of presenting a series of Irish works ranging in difficulty and style that will be suitable for amateur and semi-professional choirs, but also of interest to the wider choral community.

The book is accompanied by a CD recording of the music by the National Chamber Choir of Ireland conducted by its Artistic Director Paul Hillier, as well as performance notes by Anne Barry and Alan Leech intended to aid conductors and singers, whether performing the pieces for the first time or looking for fresh approaches to familiar repertoire.

The project has been realised with funding from The Arts Council/An Chomairle Ealaíon and is an important initiative in the context of the Council’s commitment to realising objectives set out in the choral policy document ‘Raising Your Voice’.  The works were composed between 1951 and 2011, marking the first 60 years of the Arts Council.  It is the first time all three partners have worked together in an initiative of this kind.  The anthology was officially launched by Dinny McGinley T.D. Minister of State at the Department of Arts, Heritage and the Gaeltacht at a reception held at the Arts Council on 18 October.

Choirland is available for sale from the Contemporary Music Centre  www.cmc.ie/shop/choirland