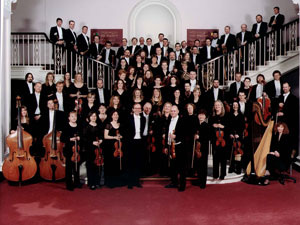 Composers in Conversation is a series of free pre-concert talks with the four featured composers of the RTÉ NSO series ahead of each of the free lunchtime concerts taking place this January.

The Contemporary Music Centre and the RTÉ National Symphony Orchestra present Composers in Conversation. This series of pre-concert talks was first introduced in the RTÉ NSO Horizons 2011 series. The collaboration gives the audience the opportunity to hear the composers of RTÉ NSO Horizons 2012 ahead of each of the concerts. All pre-concert talks and concerts are free of charge.
Composers in Conversation features each of the four composers of the RTÉ NSO Horizons 2012 Series in conversation with Evonne Ferguson, Director, The Contemporary Music Centre.
Karen Power (10 January), Ronan Guilfoyle (17 January), Kevin Volans (24 January) and Garrett Sholdice (31 January) are the four featured composers in the RTÉ NSO Horizons 2012 series. Each Composer in Conversation pre-concert talk will take place at 12.30pm in the John Field Room, prior to each concert starting at 1.05pm in the main auditorium.
“Composers in Conversation offers audiences the chance to engage with the composers featured in the RTÉ NSO Horizons 2012 Contemporary Music Series and aims to enhance the concert experience. Composers are generous in discussing their musical background, their works, their likes and dislikes. It’s a great start to the year!” says Evonne Ferguson, Director, The Contemporary Music Centre.
The RTÉ NSO Horizons 2012 Contemporary Music Series will include four world premières: two by Karen Power; one each by Garrett Sholdice and Benedict Schlepper-Connolly; the preview of Ronan Guilfoyle’s first concerto for electric guitar and orchestra, commissioned by RTÉ, ahead of its world première by the RTÉ NSO on Friday 20 January; the Irish première of Scelsi’s Quattro Pezzi per Orchestra as well as three separate arrangements by Sholdice of the Bach chorale Ach wie nichtig, ach wie flüchtig for string orchestra, brass ensemble and full orchestra.
All four featured composers are represented by The Contemporary Music Centre. Karen Power is an Irish composer who writes primarily for acoustic and electroacoustic forces. Her initial interest in composition came during her undergraduate degree in University College Cork (UCC), where she familiarised herself with as many musical styles as were on offer while developing a compositional language with ‘post-minimalist’ influences. Ronan Guilfoyle is one of Ireland’s best known jazz musicians. He studied bass and improvisation with Dave Holland in Banff, Canada, and as a bass player he has performed extensively in Europe, Asia and the USA. Kevin Volans was born in Pietermaritzburg, South Africa. From 1973 to 1981 he lived in Cologne where he studied with Karlheinz Stockhausen and Mauricio Kagel, later becoming Stockhausen’s teaching assistant. He is now an Irish citizen. Garrett Sholdice is an Irish composer, curator and occasional performer currently based in York, England. Garrett is a co-director of Ergodos, a Dublin-based music organisation he founded with Benedict Schlepper-Connolly in 2006. For detailed biographies and further details on all composers please visit www.cmc.ie

The Contemporary Music Centre is Ireland’s national archive and resource centre for new music supporting and developing the work of composers throughout the Republic and Northern Ireland. It is used on a national and international basis by performers, composers, promoters and members of the public interested in finding out more about music in Ireland. For further information on the Centre and the Composers in Conversation pre-concert talks series contact Karen Hennessy, Promotion Manager, The Contemporary Music Centre, 19 Fishamble Street, Temple Bar, Dublin 8. Tel: 01 673 1922. Email: ei.cmc@yssennehk. Web site: www.cmc.ie