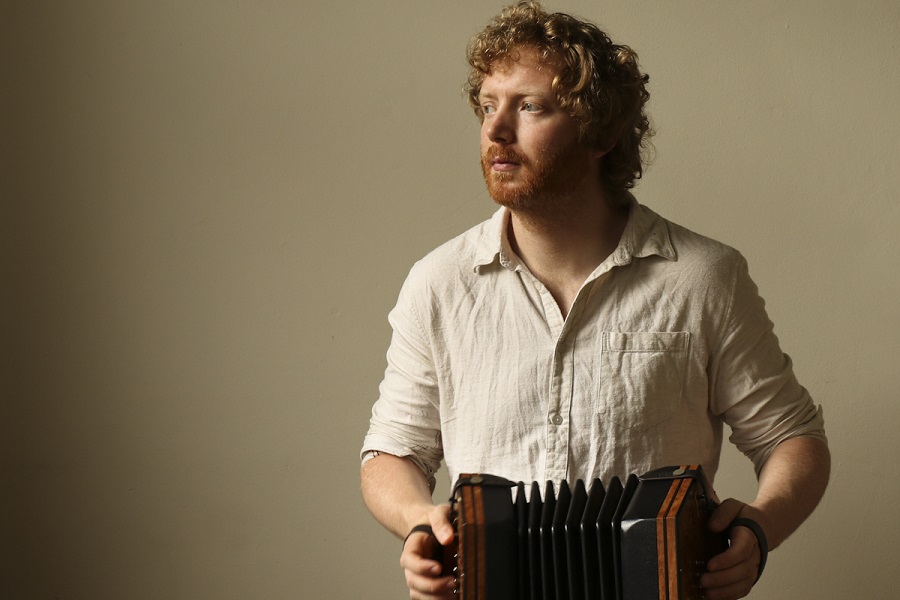 Cormac Begley’s concertina playing has been described as ‘a masterclass in timeless musicianship (Irish Times *****) and in 2014 he received the Sean Ó Riada Award for his concertina music. He plays in a number of duets including Liam Ó Maonlaí (Hothouse Flowers), Caoimhín O Raghallaigh (Hardanger D’Amore), Rushad Eggleston (Cello Goblin) and Libby McCrohan (bouzouki). He is a member of a trio (entitled ‘Concertina’) with Noel Hill and Jack Talty, and plays in the band Ré featuring Liam Ó Maonlaí, Maitiú Ó Casaide, Eithne Ní Chatháin (Inni-K) and Peter O Toole (Hothouse Flowers) and was also involved in the dance production by choreographer, Michael Keegan Dolan, entitled ‘Rian’.

Cormac has recently returned from Cuba where he played for President Micheal D. Higgin’s first state visit to Havana, Cuba. He has performed on this season’s Other Voices with Caoimhín O Raghallaigh (The Gloaming) and has featured on ‘This Ain’t No Disco – St. Patrick’s Day Special from New York (2017)’. In May of 2016, he performed with Caoimhín in the National Concert Hall’s Kevin Barry room and in October he performed again with gifted cellist, Rushad Eggleston. He will perform solo in the National Concert Hall in October 2017.

Cormac received funding from the Arts Council of Ireland to produce this album and speaking about his approach to recording the album, he says “All of the pieces of music that feature on this album instantly struck a chord with me the first time I heard them. My approach here has been simply to connect as honestly as possible with them and to produce a solo concertina album that highlight some of the instrument’s possibilities spanning across seven octaves”. Further he describes that “Each track is one take, recorded in St. Nicholas’ Collegiate Church, featuring one concertina and are all free from studio manipulation. I have sourced previously unrecorded music, other tunes within the tradition and I have written some music that features on the album.”

The limited edition album has been receiving high praise online! It is hexagonally shaped and designed to emulate the bellows of concertina. As you open the album you see the layers of the instrument and the mechanics of this complex instrument. A short video of the album in the past week has received over 43 thousand views. Speaking about the limited edition, Cormac explains that “creating the limited edition was one of the most enjoyable parts of the process” and he is “delighted that everyone involved, from the photography, recording, mixing and mastering to album artwork, were concertina players!”

Cormac is the founder of Tunes in the Church concert series (www.tunesinthechurch.com) and a residential Arts school on the Dingle Peninsula called Airt (www.airt.ie)

Cormac will be launching his album throughout Ireland in April and May by esteemed artists and musicians such as: Liam O’Neill, Tony McMahon, Mary Mac Namara and Paraic Mac Donnchadha.