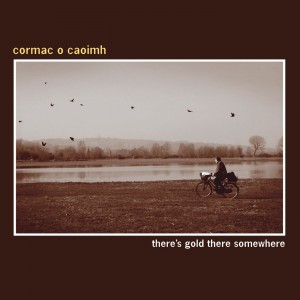 Cormac O’ Caoimh has just released the third single ,“There’s Gold There Somewhere”, from his “A New Season for Love” CD. The CD has been compared to A honeyed whiskey drink, a fine cognac on a cold winter’s eve, a warm woolly jumper, a colour – rich mahogany warm and beautiful and a water colour painting and received countless lovely and beautiful reviews from the UK, Canada, US, Slovenia and Ireland and of course the people’s republic of Cork.

Cormac, along with Colum Pettit and Fintan Lucy, provided the music for the Theatre performance of 100% Cork and finished the show singing “There’s gold there somewhere” which touched both the cast and audience of this special and thoughtful show.

100 people representing a cross section of Cork’s population were brought together to tell their stories on stage. In a once-in-a-lifetime theatre event, German documentary superstars Rimini Protokoll team created a living, breathing portrait of Cork on the Cork Opera House stage. The show was performed three times over the Midsummer Festival and the finale including Cormac performing “There’s Gold There Somewhere”. The song touched both the audience and the cast and crew members themselves and became, as one of the cast members described it, their “The soundtrack to this period of my life”

Cormac O Caoimh is a singer-songwriter and classical guitarist from Cork, Ireland. He released his second solo cd “A New Season for Love” and it is currently receiving excellent reviews .He was chosen as Play Irish artist of the month and was featured on the RTE 1 Show Arena. His intimate vocals and exquisite guitar playing is attracting the attention of musicians and music lovers alike. The last single “Remember when we didn’t kiss” topped the ITunes download charts on its release. His new series of videos attracted the attention of Godin Guitars and he is now an official Godin Guitar endorsee.

O Caoimh has picked up some well-known admirers along the way including Ron Sexsmith and Tom Robinson (BBC) and has shared the stage with fellow luminaries; Damien Rice (in the Paradiso, Amsterdam), Declan O Rourke, Josh Rouse to name but a few. He plays all over Ireland and also ventured further afield playing headlining gigs and festivals in Edinburgh, London, Amsterdam, Canada and New York (including Canadian Music Week in Toronto, London Calling in London and various other Folk, Jazz and Rock Festivals).