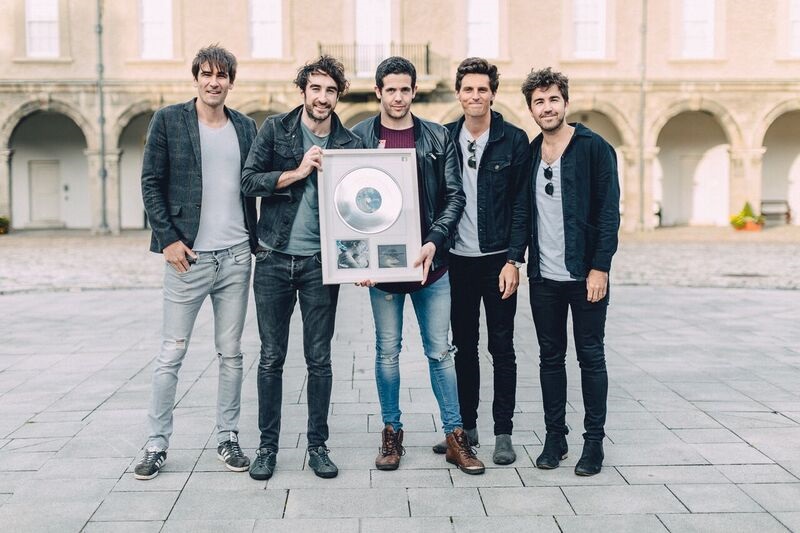 IMRO this weekend presented The Coronas with an IMRO Award in recognition of their number one album “Trust The Wire”. The award was presented to the band by IMRO’s David Wilkinson before their sold-out show at the Royal Hospital, Kilmainham, the band’s biggest headline show to date.

A sonic leap on from its predecessors, ‘Trust The Wire’ sees the award-winning, arena-conquering band fuse their arms-aloft melodic pop with lush electronics, spine-tingling atmospherics and a new-found sense of adventure. The album was released on their own label So Far So Good Records on 2nd June 2017 and went straight to the top of the charts, making this their first No1 album.

From its tightrope-walking title, to the content of its lyrics to its bold production, Trust The Wire brims with self-belief. Written on the quartet’s return to their native Dublin after almost four years living in London, it captures the focus they found in leaving home, the fresh perspective it gave them and a soaring maturity in their songwriting.

A decade on from their debut, having toured the world, topped the charts and surpassed their teenage dreams, it’s no surprise that The Coronas are surer of their strengths and readier to take risks. ‘Trust The Wire’ fizzes with ambition, often in ways you wouldn’t expect from a band famed for their sing-alongs.

After a rollercoaster three years, including a stint on a major label before deciding to do things their own way, spellbinding first single ‘We Couldn’t Fake It’ recounts the band’s realisation that they were right to trust their instincts, rather than be swayed by a label only seeking sales. The hypnotically-beautiful ‘Give Me A Minute’ is actually about Danny feeling antisocial after a gig, but sounds like a romantic statement of intent. Ditto the spectral ‘A Bit Withdrawn’, which is about misconceptions, but could be a plea to a lover.

The album’s title, taken from a line in the broody, dramatic closing track ‘Look At All The Lovers’, reflects the recurring theme of self-belief and sums up a band both acknowledging their achievements to date and stepping out of their comfort zone to tackle new challenges.

“Like a tightrope walker who doesn’t need to see the next step, they just know.” says Danny. “It’s about believing that what feels right will work and going for it. If you don’t trust your instincts, you’ll never move on. This is our fifth album. It would be easy for us to stick with a sound because it’s worked for us in the past. But that doesn’t excite us. Discovering what we’re capable of as a band, knowing that we can grow and get better is what makes us want to keep doing this.”