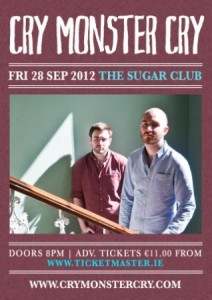 Following on from the success of the release of their debut EP “The Fallen”, Dublin folk duo Cry Monster Cry have announced a date in Dublin’s Sugar Club for 28th September.

“The Fallen” was recorded over the space of two months, often in marathon night sessions in a studio in the seaside town of Malahide. Released in May the record shot straight to number 2 on the iTunes chart and was followed later that night by a sold out launch Upstairs in Whelan’s of Wexford Street.

The past few months have seen the band playing shows including Dublin’s Communion club night, Donegal’s Sea Sessions festival, Offaly’s Castlepalooza festival, taking to the stage at The Music Show in Dublin’s RDS, opening for Belfast singer songwriter Gareth Dunlop and American folk group Sea Of Bees. Recently their song “This New Country,” which is taken from their debut EP, was chosen by Tourism Ireland to feature on their new online campaign “Jump Into Ireland”.

Tickets for The Sugar Club show in Dublin are priced €11.00 including booking fee and on sale now from Ticketmaster outlets and online at www.ticketmaster.ie