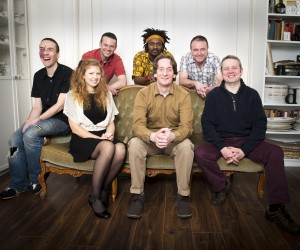 D.F.F. is one of the most exciting groups to emerge from Ireland in recent times with their African-tinged Chamber Pop Songs featuring glorious vocal harmonies and outstanding musicianship!

D.F.F. began in 2011 when Dave Flynn (guitar/vocals) had the desire to create a fresh sounding band. Flynn is best known for his work as a composer in the classical and traditional music worlds, particularly through his collaborations with Martin Hayes & Dennis Cahill (The Gloaming). However, there is another side to Flynn’s work which was set aside whilst he was concentrating on classical/traditional music. Long before he composed classical and traditional music he was a songwriter and electric guitarist. This project is a result of his yearning to return to the song-writing world where his music career began.

Flynn attended the Ballyfermot Rock School at the age of 18 and hung out in the 90s Dublin music scene performing at the International Bar alongside the likes of Damien Rice, Declan O’Rourke, Damien Dempsey, Paddy Casey, Christy Moore and Glen Hansard.  In 2000 Flynn met Pádraic O’Beirn at an IMRO song writing collaborative weekend in Maynooth and ever since then they have been writing incredible songs together. Flynn found that Pádraic’s lyrics were on a poetic level which set themselves very well to music. The songs were set aside for a decade or so as Dave was more focused on his other music but he had always saw great potential in the songs he had written with Pádraic. In 2011 Dave decided the songs deserved to be recorded with a really good band to the highest quality possible and this is how D.F.F.’s debut album “Pouric Songs” came to life.

Flynn was keen to create a special vibe around the album, a unique, coherent sound, and began to think of musicians that would fit the bill to create this album justifiably. Vyvienne Long (cello/vocals) came to mind. Dave had worked with Long in 2010 when they were both selected to be the Irish representatives taking part in a collaborative project called “The Secret Festival” in Sweden. Soon afterwards Long invited Flynn to support her on tour in Ireland and it was after seeing Vyvienne’s unique band with cellos, double bass, and hearing her voice that Dave thought she would really add a whole new dimension to the songs.

Niwel Tsumbu (guitar/vocals) was the next piece to be added to the puzzle. Dave Flynn had a long time love for African music, especially the style known as Congolese Rumba. In 2009 Flynn thought to himself that there must be a few Congolese musicians based in Ireland and low and behold after a quick Google search he found Niwel’s MySpace page. After meeting up and getting on great together with their music they did their first gig together on Africa Day in Dublin’s Iveagh Gardens back in 2010. When it came to recording this album Dave immediately thought of Niwel as there is a strong African influence in a lot of the songs. Like Vyvienne, Tsumbu brought the songs into another dimension. He knows African guitar styles inside out and brings an authentic African perspective to the album.

To complete the band, Flynn brought Ciarán Swift (rhythm guitar), Aidan Dunphy (percussion) Cion O’Callaghan (percussion) and Dan Bodwell (double bass) on board. Flynn had originally created a band years before with Swift, Dunphy and O’Callaghan. He knew Swift through the Rock School in Ballyfermot and he got to know Dunphy and O’Callaghan through another Rock School student, Roesy. Dave knew they would work perfectly for the rhythm section of D.F.F. Bodwell was a much more recent acquaintance of Flynn’s who he met through Vyvienne Long’s band.

With all the band members on board D.F.F. were set to start recording the album and made their way to Peter Gabriel’s ‘Real World Studios’ and ‘Grouse Lodge Studios’ to make the music happen. The album title ‘Pouric Songs’ was a creative phonetic occurrence. Flynn thought a mysterious album title would be a good fit and came up with the idea of phonetically spelling Pádraic as he knew people who don’t speak Irish might pronounce ‘Pádraic’ completely wrong. And so the name ‘Pouric Songs’ came about for the album title, simple and interesting.

D.F.F.’s debut album is a unique listening experience; with an incomparable sound they merge singular talents and international reputations into one genre-bending musical concoction that reflects the diversity of Ireland’s modern music scene. The songs are full of glorious pop melodies, poetic lyrics by Pádraic O’Beirn and a truly unique instrumentation of three vocalists, three guitarists, two percussionists, cello and double bass.

The interaction between Flynn and Long is crucial to the album. Their voices merge and contrast to give life to

Ó’Beirn’s poetic lyrics. Flynn’s technique of multi-tracking E-Bowed guitars alongside Long’s luminous cello gives the album an innovative modern take on orchestral string accompaniment. The rhythm section have laid down irresistible grooves above which the three pronged African style guitar attack of Flynn, Swift and Tsumbu soars. On the more introspective tracks Flynn has coloured the music with intricate instrumentation including glockenspiel, mbira and cimbalom.

This is the kind of album that would match well with film and TV soundtracks. It exudes sounds that are pleasing to the ear and links nicely to visual imagery. This album will get you up on your feet dancing too! There are some great rhythmic tracks that will get your body moving , for example, ‘Freaky Funk’ and ‘Phantom Moves’, in contrast to the moody cinematic tracks like ‘Lullaby’ and ‘Quartz’. The album is due for release on the 4th of April.

An interesting side note to the album links in with film director Greg Hanec’s ‘Downtime’. D.F.F. lyricist Pádraic Ó’Beirn was living in Canada in1985 where he met the now renowned cult art film director Hanec. Hanec cast Pádraic in his experimental film ‘Downtime’ which is now regarded as a cult classic of Canadian film. ‘Downtime’ has recently been released on DVD for the first time and this happy coincidence has led D.F.F. to create, with Hanec’s permission, videos for the songs ‘Mad For You’ and ‘Skin to the Bone’ off their debut album, based on footage from ‘Downtime’.

The band’s upcoming live shows in April 2014 promise to be dazzling affairs where the songs will be stretched in new directions each night through the virtuoso musicianship of D.F.F. Tour support is Omagh singer-songwriter Michelle Owens who will also be performing with D.F.F. as backing vocalist and on an array of instruments.

D.F.F.’s April tour is supported by an Arts Council of Ireland Touring Award.