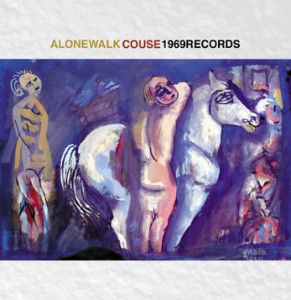 Spare, but beautifully recorded and played, this, by anyones standard, marks a departure for Dave Couse as an artist. With an entirely new palatte of sounds, the songs are a heady meditation on life and love and loss. Following "The World Should Know" (2005), Dave raced back into the studio, and after a Blue Nilesque recording session re-emerged with the majestic "Alonewalk". Mastered by the beyond legendary Bob Ludwig….go on wiki him…anyone who has heard this album has been raving about it. Now its your turn. enjoy!!

"Alonewalk" is the third album released by Dave Couse since the break up of A HOUSE, his second on the Irish Indie label 1969 Records. Originally given an online release back on Good Friday April 2nd, the album now gets it's commercial release in all good record shops nationwide on Oct.1st, 2010.

NICK KELLY ~ IRISH INDEPENDENT
“Couse has returned, Phoenix-like, with — shout it from the rooftops — the finest album of his career. No, really. Released on 1969 Records, Alonewalk is a total revelation — the songs are written in a more classical mode, with nuanced cello (courtesy of Rike Soller) and electric guitar (courtesy of A House alumnus Fergal Bunbury) embroidering Couse’s evocative, soulful piano melodies.”

TONY CLAYTON-LEA ~ IRISH TIMES
“… so much here is the work of a singular songwriter getting to grips (as is his wont) with nitty-gritty subjects in a reflective, almost sombre (but always compelling) manner”

JOHN MEAGHER ~ IRISH INDEPENDENT
“… a pair of songs, ‘Black and White’ and ‘Don’t say a word’ are as good as anything he’s written, but the Standout song is ‘Good Friday’. With just eight tracks, ‘alonewalk’ doesn’t outlast its welcome and it’s a collection to reward the patient listener.”

COLM O'HARE ~ HOT PRESS
“Dave Couse’s place in the pantheon of great Irish songwriters is assured. His first solo album in five years finds him in a mellow, introspective mood blending classical song structures with pop, post rock and even doo-wop. The songs range from the poignant, elegiac beauty of ‘what will become of us’ and ‘don’t say a word’ to the melodically quirky ‘Good Friday’ which features another singularly unique Irish voice in Cathal Coughlan.”

NIALL CRUMLISH ~ STATE.IE
“…I’m conscious of the absurdity of comparing Dave Couse to Beethoven. I have just spent two weeks with "Alonewalk" and it is such a thrilling and mysterious and moving record that, for now, the comparison stands.”