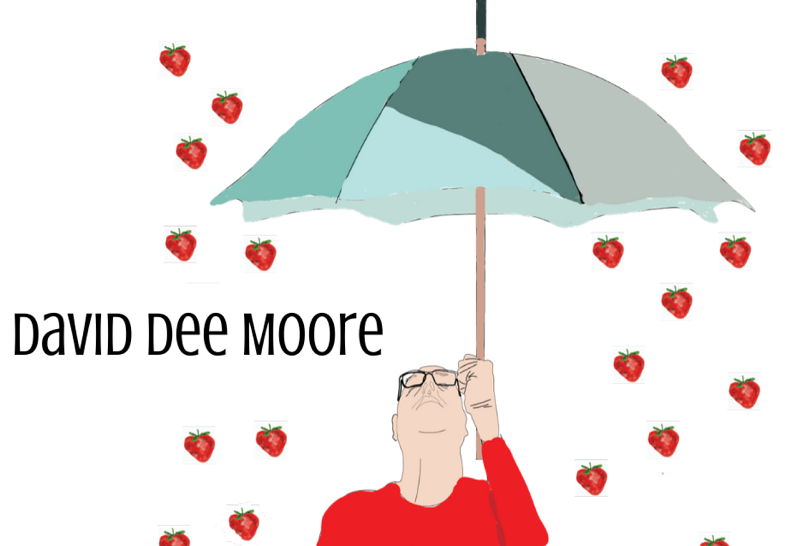 David Dee Moore is celebrating 40 years of playing, writing and producing music with a new self-titled album in the Spring of 2020.

In the run up to the album release, David will be sharing a few tracks; the first of these is his brand new song Strawberry Freckles and one of his more popular tracks on the live circuit, Peaches and Green. Both are available on all platforms from November 22nd 2019.

David Dee Moore celebrates 40 years of music-making having spent the last 20 years playing in the West of Ireland especially in Matt Molloy’s bar (The Chieftains) to packed audiences with his rhythmic foot stomping set and he recently played at the Westport Arts Festival, the Belfast/Nashville festival and a series of select Irish venues.

Originally from Belfast, Dee Moore as he was known, grew up playing music with singer/songwriter Bap Kennedy, teaching him his first guitar. He played bass guitar in punk band The Ex-Producers appearing on such programmes as the BBC series ‘Something Else’ which featured bands like the Clash, Ian Dury and the Undertones and also winning a BBC songwriting contest which set David up for a career in music. Completely against the grain, David then turned his hand to traditional folk music joining ‘A Handful of Earth’ where he met up with fiddle player Brian McAteer who became his long time musical accomplice. David and Brian joined the touring folk rock band Clíbin with Uileann piper and cellist Neil Martin, another musician who features regularly on his albums.

This experience in traditional music and folk rock culminated in the creation of ‘The Loose Connections’ with Niamh Parsons and one of the worlds finest Uileann pipers John McSherry. The band released the Album ‘Loosely Connected’ in 1993 on the Scottish Greentrax label. It featured a few songs from David like ‘Little big time’, ‘Don’t give your heart away’ and ‘Play a merry jig’ and it immediately became one of the top folk recordings in the UK and Ireland that year. The album is considered a classic and catapulted the band to major popularity around the world with the Green Linnet label in the USA signing up the band and re-releasing it to critical acclaim. A second album followed, ‘Loosen Up’ which was produced by David with most of the tracks including traditional sounding tunes all written by him.

David and Niamh split in 1998 with their last gigs together at the Dublin Ohio Irish music festival in the USA and the Tönder Festival in Denmark. David continued writing songs and playing session bass, collaborating with artists like Steve Wickham (The Waterboys), the legendary Liam Clancy, Juliet Turner and Jerry Fish. His talent was still sought after and he wrote music for films and documentaries for RTE, BBC and Channel 4 (UK).

In 2010, David began work on a demo CD for a brief tour of the USA which featured a collection of new and old songs under the title ‘The Almighty Warrior’. This whetted the appetite for David to begin work on his acclaimed CD ‘The sun, the moon, the stars…and other moving objects’. This is a collection of Irish, Americana and contemporary songs that features legendary musicians, Nick Scott (Gilbert O’Sullivan, Van Morrison), Pete McKinney (The Waterboys, 4 Of Us) and John McCullough.

The album was recorded at Red Box Studios in Belfast, co-produced by Donal O’Connor and released in 2013. In 2015, David released the self-produced EP ‘Burst’ showcasing 5 songs with a pop flavour and followed it with his ‘A Sea So Shallow’ EP in 2018 which celebrated David’s home on the West coast of Ireland.

He is now recording and putting together a compilation of songs celebrating his 40 year career in the music business. This will be released in Spring of 2020.