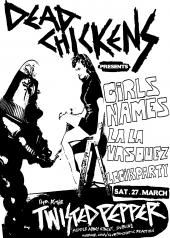 
Girls Names – Formed in January 2009 with their first gig booked before even playing together,  Belfast 's Girls Names unabashedly hark back to the early/mid eighties shadow world of Beat Happening, Black Tambourine, Felt, C86 and the Sound of Young Scotland. In their short existence they have quickly honed their craft in creating their own self-styled “disposable noise pop”, masking subdued bittersweet vocals and melodic hooks with reverb drenched guitars and Mary Chain primal drums.

Having sold out of their debut home taped demos on Cass/Flick (Belfast) last summer and after a string of support slots with the likes of Sic Alps, Wavves, Times New Viking, Lovvers and Gary War, Girls Names are set for their first release 'proper', with a 12" EP on Brooklyn’s much talked about Captured Tracks label and a full UK tour with label buddies, La La Vasquez in the spring.
Expect more releases in the upcoming months through Cass/Flick and Tough Love Records ( London ) and a debut album in the offing before the year is out.
www.myspace.com/girlsnames

La La Vasquez "Get on the party train with La La Vasquez. After playing their first show at Upset The Rhythm's Yes Way last year they've run riot in in sweaty rooms up [and sometimes down] the UK matching laid-back vocal harmonies with wicked shouts. Now they're moving on from their savage days with a melodic set of fuzzy jams that are a must hear in 2010. Au Pairs, Young Marble Giants, Bikini Kill, K Records… whatever, they love that stuff but they're on their own track. Don't miss their 7" released on Captured Tracks this month, "Don't Rush Me" on the Paradise Vendors/ Italian Beach Babes Compilation and their show at the NQ Trof. Going to be 3 Parts girl, 2 Parts beer, 1 Part Cider, all rulin'."
www.myspace.com/lalavasquezband

Logikparty's sound is abrasive, atonal, austere and agitated. They were saved from a life of crime and vice in the year 2009 by Scandinavian pagans and impetuously became infamous practitioners of occult rituals…….
Logikparty thinks – therefore Logikparty am……
www.myspace.com/ logikparty