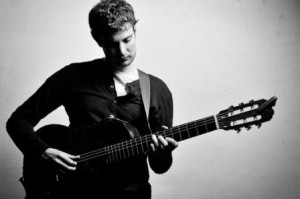 Born in Dublin to a Spanish mother and an Irish father, Eric was raised on a healthy mix of music from around the globe. With a strong love of Latin grooves, 1920’s North American song craftsmanship, and 1960’s Surf harmonies, it wasn’t long before Eric began to blend his diverse inspirations through his own unique compositions. After completing an honours degree in Chemistry at University College Dublin, Eric finally succumbed to his true calling by obtaining a Masters in Music and Media from Trinity College Dublin.

It has been a busy year for Eric, supporting such musical luminaries as Bic Runga at The Cork Opera House and The Olympia Theatre, and opening up a host of shows for established Irish acts, including Cathy Davey, Dave Geraghty, Vyvienne Long and Tiger Cooke. He also played to a packed tent at this year’s Electric Picnic as well as an appearance alongside Jerry Fish and Picture House in Bruxelles for Arthurs Day.

“Little Ripples”, Eric’s self penned, arranged, performed and produced debut album, has garnered critical acclaim in the media. With its instantly catchy harmonies, unusual chord progressions, and breezy instrumental arrangements (captured at various farmhouses, mountain lodges, and pro recording studios all over Ireland) engulfs one with his uniquely appealing sound from beginning to end.

His debut headline show will take place in Whelan’s on November 24th, in association with AIKEN promotions, and it is certainly one not to be missed.

You can get a taste of what to expect next Thursday, 22nd November when Eric features on RTÉ’s The Works at 10:40pm.