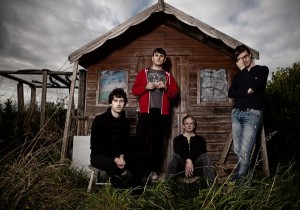 Dublin 4-piece Delorentos have announced their biggest Irish headline show to date – a Christmas show in Vicar Street on Friday 21 December. Tickets are priced at €20 including booking fee and go on sale next Monday 10th September at 9am from www.ticketmaster.ie.

Having consistently thrilled audiences throughout 2012 the band were one of the highlights of last weekend’s Electric Picnic festival as well as having made serious waves and many friends at European Festivals this summer (including a main stage performance at Benecassim).

Delorentos’ recent, self-released (and third Top 10) album, Little Sparks, saw them set up one day pop-up shops in disused spaces to promote the record and play to all comers, on top of having produced a full-colour magazine to package a 4-track EP that preceded the album.

Suffice it to say the Little Sparks album has been hailed as their best music to date with a rake of 4 and 5 star reviews:
“The sound of a band who have found their musical and lyrical groove.” Irish Times
“One of the finest Irish releases of recent times!” entertainment.ie
“Uniformly fabulous!” state.ie

Tickets for Delorentos live at Vicar Street on Friday 21 December go on sale on Monday 10th September at 9am from www.ticketmaster.ie