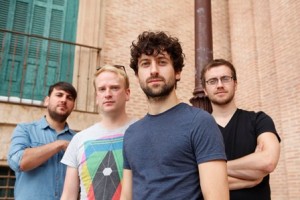 Tickets are on sale now with a limited number of early bird tickets priced at €10 including booking fee! http://www.ticketmaster.ie/Delorentos-tickets/artist/1192554?tm_link=tm_homeA_g2&hot_ticket_brand=home

After a dizzyingly great year in 2012 – that saw the band release their 3rd album, Little Sparks (Delo Records), to a hail of fantastic media reaction, the band knuckled down to a touring schedule that saw them playing the length and breadth of Europe winning new fans every step of the way and climaxing with a sold out Vicar Street show just before Christmas.

2013 started with a bang! Delorentos won the Meteor Choice Music Prize Irish Album of the Year for Little Sparks and were in Dublin airport at 6am the next morning to start a very successful whistlestop tour of North America (New York, Austin’s SXSW, Memphis, Toronto’s CMW) and Russia – from the sublime to the absolutely freezing!

Amidst all of this activity an email from the office of the President of Ireland arrived congratulating the band on their Irish Album of the Year success and inviting them to play at The President’s annual Garden Party this summer.

Meanwhile the band’s summer schedule is suitably full of interesting shows and festivals – including a month of festivals in Spain as well as Summer shows in Paris and Vienna.