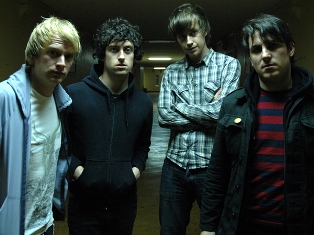 DELORENTOS are delighted to announce the forthcoming release of a 12-track album, Little Sparks, on 27 January 2012 along with a full electric tour to co-incide.

Recorded with Mercury Music Prize Award Winner Rob Kirwan (PJ Harvey), the 12 tracks are the fully-fledged fruits of the band’s recordings over 2011 and display a depth of songwriting prowess that ably eclipses the band’s first two albums and offers a real insight into the ever-growing potential of the band.

It follows hot on the heels of the recent 4-track EP (of  the same name) which came packaged with a full colour, 40 page magazine that the band devised and edited – with the help of their friends – and was accompanied by a successful acoustic tour of Ireland (the band’s first ever).

All of which signals a new approach by the band who are keen to embrace and share all aspects of their interests and skills from here onwards.

The band have also just released the first of a series of acoustic videos filmed lovingly by Award-winning film-maker Myles O’Reilly and his crew, which you can find here:
“Hunting”  https://www.youtube.com/watch?v=7E8_2HBQz9c