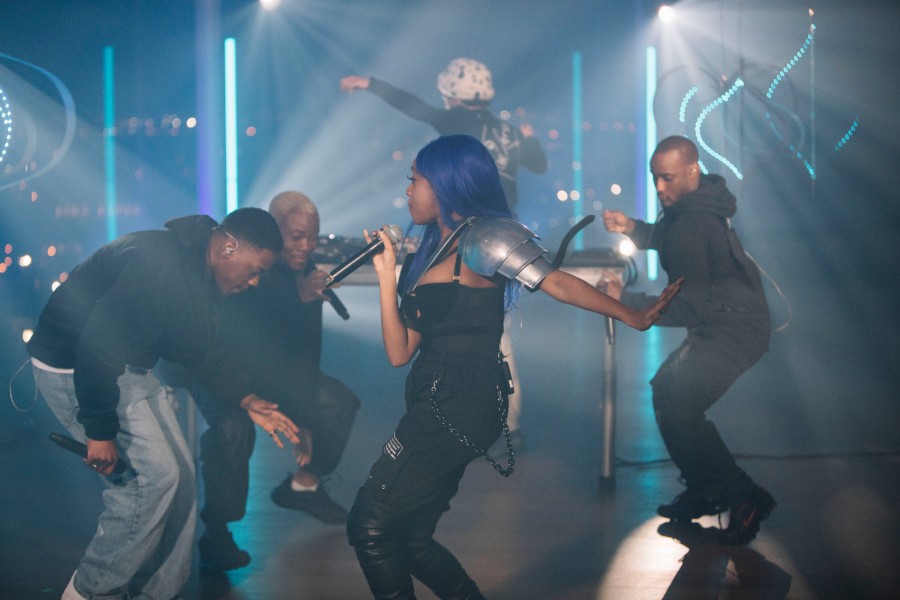 It is fitting that Denise Chaila’s final single release of the year is ‘Anseo’ (pron. ‘on-shu’)  – the Irish word meaning ‘here’, familiar to all school children in Ireland as the appropriate response to give upon hearing their name during morning roll-call.

After the first single from her mixtape was released in May and made her the highest-charting Irish female artist of the year, there is no doubt that ‘Chaila’ truly is a household name. There haven’t been many certainties in 2020, but one thing that is indisputable is that Denise Chaila is definitely  anseo, here, present – and not going anywhere.

Upon the release of her debut mixtape ‘Go Bravely’ in October, ‘Anseo’ quickly became a firm favourite with radio, critics and fans alike. Rather than go the obvious route and release the song ‘as is’, Denise and her label narolane records – of which she is a cofounder – decided to go one better and invite another of Ireland’s fastest-rising hip-hop stars, Jafaris (signed to Dublin-based powerhouse Diffusion Lab / DFL) to feature on a new version of the track.

Narolane records says: “To state the obvious, 2020 has been a difficult year, but also a year of reflection and recalibration. Music has yet again provided us with more than entertainment. It’s been our escape when we needed it and a ray of sunshine in the storm. We’ve been overwhelmed by the support many of you have shown for the work we do here at narolane. We all can’t wait to see the back of this year but we couldn’t see it out without one little gift for you, so we asked our friends at DFL to join us on this anthem to spice up your holidays with this collaboration with Jafaris. Let’s dance a little!”

Dublin-based Jafaris is one of the frontrunners of the new generation of Irish hip-hop artists, having been nominated for the RTÉ Choice Music Prize for his debut album ‘STRIDE’ in 2019.

Jafaris says: “This song represents the mentality that I believe Ireland needs to adopt in order to be an example to the world. We have an opportunity to tackle the race issue that plagues our world by adding to the already potent culture that exists here through creativity, innovation and economics. I have ideas, so I shouted out my bro Michael D Higgins. Denise was already spreading a similar narrative and it only felt right to come together and express our views.”

Denise Chaila was recently named Irish Tatler’s ‘Woman of the Year’  in the music category, highlighted by style bible Harper’s Bazaar and included in The Guardian’s Top Songs of 2020.  Denise was also announced in The Great Escape’s First Fifty line-up announcement in November. The Great Escape is the UK’s festival for new music, showcasing 500 emerging artists from all over the world in 30+ venues across Brighton and a pop-up festival site on Brighton Beach.

Last night, Wednesday 16th December, Denise Chaila and Jafaris performed ‘Anseo’ to audiences worldwide via the Other Voices at Home series, live-streamed from the iconic Guinness Storehouse in Dublin. ‘Anseo’ will be available on all digital streaming platforms from midnight tonight and available for purchase as a digital download from Bandcamp.