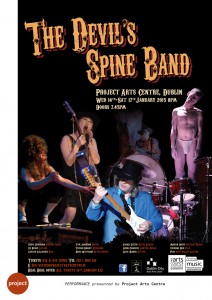 “The Devil’s Spine Band” are bringing their anarchic Wilde West sensibility to The Project Arts Centre Dublin in January 2015.

Inspired by Oscar Wilde’s lecture tour to the mining town of Leadville Colorado in 1881, they will invite you into their surreal desert world, combining the gritty atmosphere of the Wild West with Japanese Butoh dance, and music by IMRO members, Trevor Knight and Ed Deane, that incorporates Spaghetti Western, blues, free improvisation and ambient-electronic.

Each evening they will be joined by a different special guest performer, including performer/ singer Dylan Tighe (Thursday) and performance artist Áine Phillips( Friday).

The Devil’s Spine Band was created in 2011 to act as a flexible vehicle for an eclectic group of musicians and artists (dance, butoh, visual, film, performance) interested in stretching the boundaries of their various disciplines and combining to create a stimulating new experience for audiences.