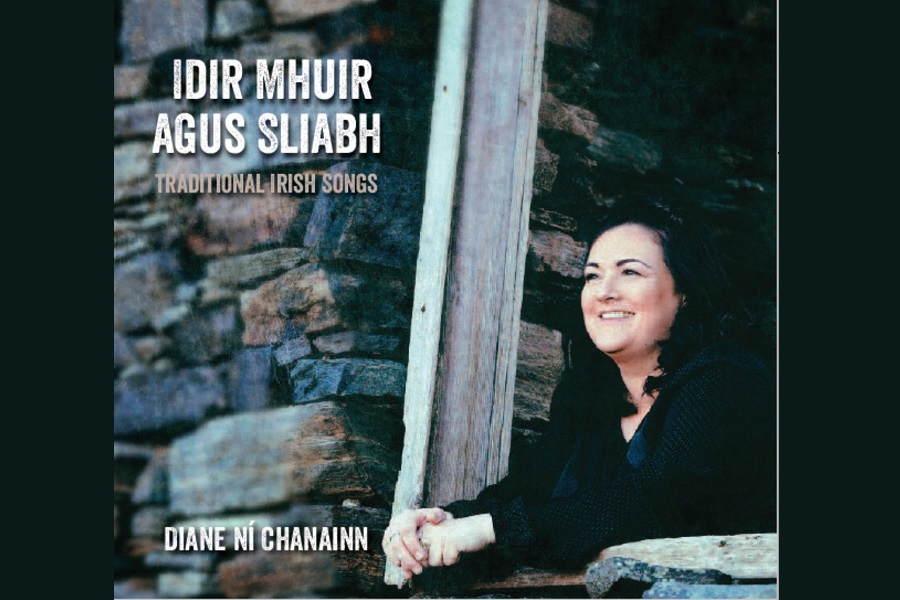 It’s not often that a new voice arises out of an ancient tradition, managing to fuse the richness of the past with the promise of the future. Forged out of the centuries-old traditions of her native Donegal, Diane Cannon is a singer who brings the songs and the music played by the hearth fire of a long gone Ceilí house, to the sophisticated tastes of a 21st century audience. From Meenlaragh, which nestles between spectacular Errigal and the Islands of Tory and Inisboffin in the heart of the Donegal Gaeltacht, Diane inherited her musical talents from both sides of her family; all four grandparents were accomplished musicians and singers. As a youngster Diane frequently won competitions and she competes successfully to this day, most recently winning first place in the prestigious Comortas Cuimhneacháin Shéain Óig Uí Thuama at Oireachtas na Gaeilge. Her long anticipated debut album Idir Mhuir agus Sliabh follows hard on the heels of her single ‘Séan Ó Duibhir a’ Ghleanna’ which was released last year to great critical acclaim.

Some of the leading lights in Celtic music perform on the album; Donald Shaw, Michael McGoldrick, Neil Martin, Charlie McKerron amongst many others. There are a few beautiful duets with friend, mentor and renowned sean-nós singer Lillis Ó Laoire. Diane says “For a number of years, I have been working on and researching, with Lillis, forgotten songs of my native area, great songs, although they have never been recorded,” she says “I’m delighted to breathe new life into these old songs, rejuvenate them with modern arrangements while still remaining true to the core tradition.”

Diane is extremely proud that Mairead Ní Mhaonaigh of Altan features on the album, playing a tune she learned from Diane’s grandfather and good friend of the Mooney family; Manus Cannon. The record includes songs that are specific and personal to Diane’s homeplace – ‘An Droighnean Donn’ and ‘Toraigh Álainn’ from Tory Island and ‘Cnoc na Naomh’ & ‘Bainín Mhín a Leagh’ have been revived and given new life by the emotion, love and understanding of Diane’s richly expressive voice. There are a few songs in English which have been favourites of the family for years which she interprets equally as well as the sean nós songs; ‘Broom of the Cowdenowes’ and ‘Lough Erne’s Shore’, these are songs which she learned from the singing of Oriel singers Garrett Doran and Eithne Ní Uallacháín.

Maintaining the tradition of family unison singing, Diane is joined on on Níl sé na Lá and Mhaithrín Dhilís by her daughter Kelly Ní Chanainn, who she proudly raised, mentoring and steeping her in traditional Irish music and the Irish language. The album also succeeds in taking some of the old songs in the tradition and breathing a fresh new life into them with great understanding and empathy by producer Manus Lunny.

Diane adds “I wanted to record an album that reflects all that is important and special to me. Songs and tunes from home, staying true to my local traditional style while adding some magic with new arrangements; breathing new life into the songs.”