Director of the Contemporary Music Centre to Step Down 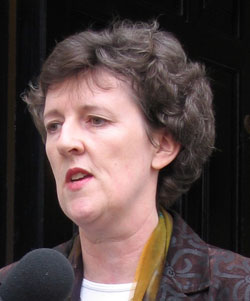 Eve O'Kelly has announced her intention to resign as Director of the Contemporary Music Centre, Ireland.

Eve joined the Contemporary Music Centre (CMC) in September 1990 and has since then overseen the continuous growth and development of the Centre into its current position as the focus for new music in Ireland, north and south. On joining CMC she managed the foundation and computer cataloguing of the library, now the only comprehensive collection of 20th and 21st century Irish music scores, recordings and research materials. She also fundraised and managed a major archive transfer project to copy and catalogue some 3,500 recordings of Irish music from the 1930s to the 1980s from the sound archive of RT to the CMC collection. In 1996 CMC was one of the first Irish arts organisations to use the Internet. Continuous development of CMC's web site since then has made it into a leader among Irish arts web sites, particularly in the use of Web 2.0 technologies, and has ensured high visibility for contemporary Irish music abroad. A major digitisation project is currently underway which will see the whole of CMC's collection available online for public access.
In 2000, following a long campaign of fundraising, purchase and renovation, Eve managed CMC's move into its own building, a historic house in Dublin's cultural quarter, Temple Bar. Other significant projects initiated and carried out during her tenure include the new music::new Ireland international performance programme, the touring exhibition The Art of Sound for Cork 2005, the well-established CMC Salon series and in-house talks and events, and the promotional CD series, Contemporary Music from Ireland. She is a board member of the International Association of Music Information Centres and CMC will host the annual conference of the Association in Dublin in June.
Commenting on her resignation, Mary McAuliffe, Chair of CMC, said, 'It is with great regret that we accept Eve's resignation. Her achievements in the post have ensured that CMC has a firm foundation and a clear sense of mission, and her drive and vision have given it an international as well as a national profile.'
Eve will be stepping down at the end of June.

The Contemporary Music Centre is Ireland's national archive and promotion agency for new music, supporting and developing the work of Irish composers nationally and internationally. It is funded by the Arts Council/ An Chomhairle Ealaon; the Arts Council of Northern Ireland and Culture Ireland.
Latest News