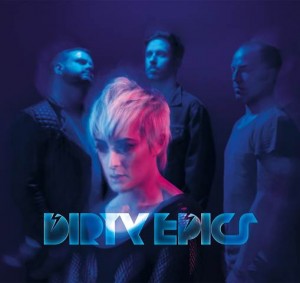 Dirty Epics sophomore album, One-Way Mirror, produced by Declan Gaffney (U2) and Matt Paul (Amy Winehouse, Noistettes, Hotchip), is an offering of songs about the light and dark of the human condition, from blind faith and the first flourishes of love to the depths of depravity.

Their high energy music has been featured on tv in Ireland, UK and the US and film including a full track on E4s top teen TV drama series Skins and two tracks feature in the new series of BBC’s vampire drama “Being Human”.

“Our aim is to create music that pulses and thumps and buzzes in your brain and your heart, which gives you strength and belief”.

“They’ve honed their sound too into a formidable, controlled sonic assault, while the songwriting carries the mark of a band who’ve got what it takes to scale the heights… the superb current single ‘Midnight Missing’ and the terrific adrenalin rush that is ‘Beautiful Mistake’…One Way Mirror is a scorcher.” Hotpress

“Dublin quartet Dirty Epics have moved a distance from the hard-nosed punk inclinations that marked their 2008 debut Straight In No Kissing… they keep it uncomplicated and punchy.” The Irish Daily Mail on Sunday

“Dirty Epics have been slinking around the scene for a while, getting progressively tighter and sexier…When they emerge from the lab with ‘One-Way Mirror’ it’s going to surprise a lot of people. It’s a delicately formed Frankenstein’s monster, and a perfect example of the Retro-Futuristic style. Some will find the riff heavy guitar parts hard to reconcile with the peripheral electronica, but the guitars make perfect sense on this record, they balance the sultry detached tones of SJ’s voice.” TNT24.ie

“Let’s Be Alone and Those Pretty Things are the albums stand out tracks. A boisterous bravado of sounds completed with cleaver catchy choruses makes them the albums sing along songs, but with a rambunctious vengeance. …Dirty Epics have honed their skill, and so erupts a tighter more formidable record in ‘One Way Mirror’. Given the attention they have garnered as a live proposition, a particular justice should be done to an album of such pizzazz and intensity. ‘One Way Mirror’ is a stellar sophomore album.” Goldenplec.com

“Should you enjoy stabbing synths, Siouxsie-style vocalising and fresh re-imaginings of pre-Thatcher new wave, as we tend to, you will love them…” Broadsheet.ie