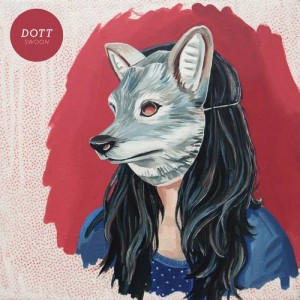 Dott’s eagerly-awaited debut album ‘Swoon’ is to be released on December 3rd in the US. The band will tour in November with advance copies of records and CDs. The album marks Dott’s second release on US label Graveface Records after their re-issue of the critically acclaimed EP “Button” on 7” vinyl in April of this year. Small Pony, the opening track of the album was premiered on Impose Magazine earlier this month and has been receiving glowing reviews since then.

Gloriously vibrant in its pounding alternative-pop sound (The Journalist.ie), a pocket rocket set to steal hearts (The Sunday Experience), Crunchy guitarpop that has a strong face and a soft heart. (Impose Magazine)

The album will be available on download from iTunes, Bandcamp, etc., and on CD from selected record stores including Tower, RAGE, Elastic Witch in Dublin, Plugd in Cork and the Bell Book & Candle in Galway

Dott are from Galway, Ireland and play shiney, harmony-driven guitar pop. Their eagerly awaited debut album “Swoon” will be released on December 3rd 2013 on Graveface Records US.  Their EP “Button” was released in 2012 on the Popical Island Collective and on 7″ vinyl with Graveface Records USA in April 2013.

“Dott have some infectious tunes on their Button EP… “Leave Tonight” and “Let’s Do It” are especially good.” Bill Pearis, Brooklyn Vegan

Dott is a band that astutely turns that inherent sweetness into a melee of crunchy guitars, masterful breakdowns, and deliberate “oo”s and “ahh”s that don’t put the song too far into pop territory. Dayna Evans, Impose Magazine