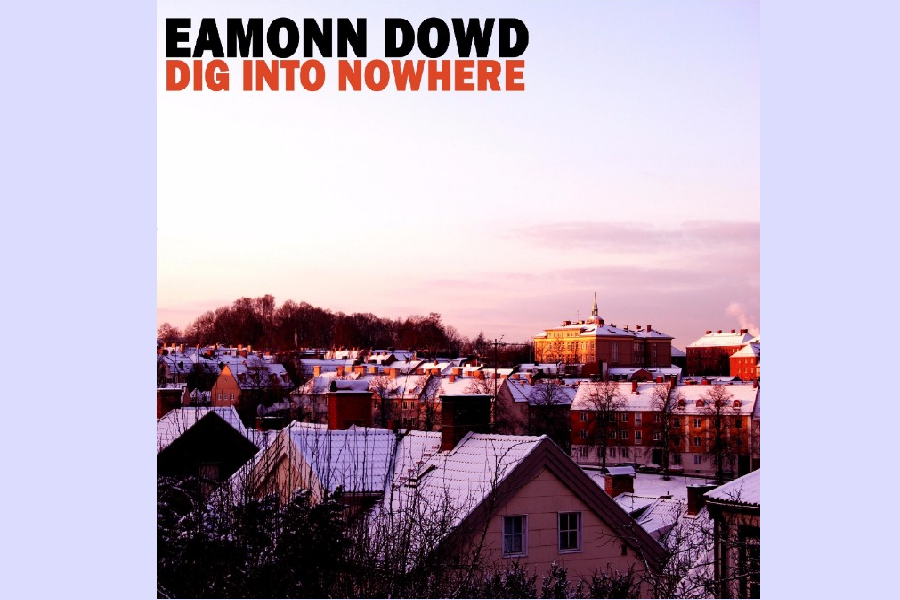 Irish-Nordic rocker Eamonn Dowd‘s new album “Dig Into Nowhere” is a muscular and tender tour of dislocation, bitter/sweet 1970s memories and the accumulations of a musician’s life on the road.

From the white wastes of his perch in Sweden’s Gothenburg, Eamonn Dowd is back with “Dig Into Nowhere”, his tightest sequence of songs in a 30-year career. Unnamed places straddle Nordic locations and what must be his native west of Ireland, all mapped against northern Europe’s no man’s lands, cities, bars and streets. His dislocated songs burst from the heart and mind of a travelled troubadour: the only certainties are the road, the night, hanging around and shifting senses of direction. Dowd’s compass is global, his consumption of life is one long time-beating trek as signaled by the title “Dig into Nowhere”. And nowhere is this clearer than in the epic single “Departure Lounge”: “Won’t you take me back/Take me back home?/I would go if I knew which way to go… Should I go north or south/Should I go east or west?/Take me back.”

Often-skeletal words meld with punk country-tinged music that ranges from tender to blistering in poignant portraits of last-ditch couples and introspective loners. Two lovers go in to a drab town but are dismayed by what they find. When all else fails, they may or may not have each other: “I looked into your pale blue eyes/Every word a thin disguise.“ When Dowd sings “We got to go tonight/Through these lonesome streets”, the “we” seems less the happy couple and more the brave human accompanied only by his own ideas and unbeaten sense of self-worth.

Music flows through this record like blood: Dowd’s own artistry ‑ his respect of music as a spectral presence, as an identity, as a force – is bolstered by explicit references to the musical heroes that fuel the ether of anyone with a toe to tap, with a heart to be ravaged by guitars and drums. Through lives of damp and 1970s sadness, Eamonn Dowd’s music flows, a river of sound that drags memories and introspection with it, that carries drowned ghosts of Radio Luxembourg into your broken transistor soul.

“Dig Into Nowhere” features a stunning cover of Nikki Sudden’s bleak “Death is Hanging Over Me” and the catchy wistful premonition of regret that is his powerful co-composition with Horslip Eamon Carr (“The Greenwood Shade”).

Eamonn Dowd and his crew of Swedish and Irish musicians play tightly across all 13 tracks, sketching a life of arrival and departure, of urban emptiness and rural dissatisfaction, where the “crows are circling low”. The music ranges from the beautiful keyboard tinged final act of “Thin Disguise” to the malicious country of “Let’s Just Pretend” and the closing rock-blaster “Persian Princess”.

Thirty years in the business, Irish rocker Eamonn Dowd’s career ley line runs through cult legends The Swinging Swine, Captain Hex and years of solo records and releases with bands The Racketeers and The Last Souls. Dowd’s latest release is a major step forward for his idiosyncratic talent. Dig Into Nowhere is the work of a committed songwriter, a man driven by his music but wary of the industry that might cage or co-opt it. Eamonn Dowd navigates by his own star across a maverick and muse-riddled world of music. “Dig Into Nowhere” is the proof.

“Dig Into Nowhere” is available now.