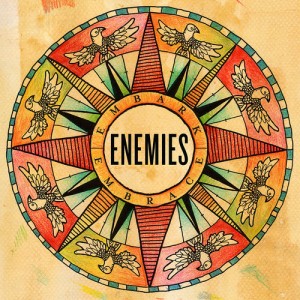 Enemies are delighted to announce the release of their second album Embark, Embrace this coming May.

The math-pop four piece from Co. Wicklow will release the album on their own label, Heavyweight Records, on May 10th. It will feature ten new tracks, including the recent single Indian Summer.

Enemies embark on an Ireland/UK tour in March in support of the new record.

Enemies formed in the summer of 2007 within a thriving Do-It-Yourself music scene in Kilcoole, Co. Wicklow. In Spring 2008, Enemies released their debut EP Alpha Waves which led to Japanese labels Machu Picchu Industries and Stiff Slack Records picking up the band for releases. A two-week tour of Japan followed in which the band played sold-out shows in Tokyo, Osaka, Nagoya and Kyoto.

In June 2010, Enemies released their debut LP We’ve Been Talking on extremely reputable indie labels Richter Collective (IRL) and Stiff Slack Records (Japan). We’ve Been Talking features pressings of the band’s own unique take on instrumental rock, one which is nuanced yet clear cut, melodic yet ferocious and energetic yet emotive. The band spent the following two years touring We’ve Been Talking throughout Europe and Japan.