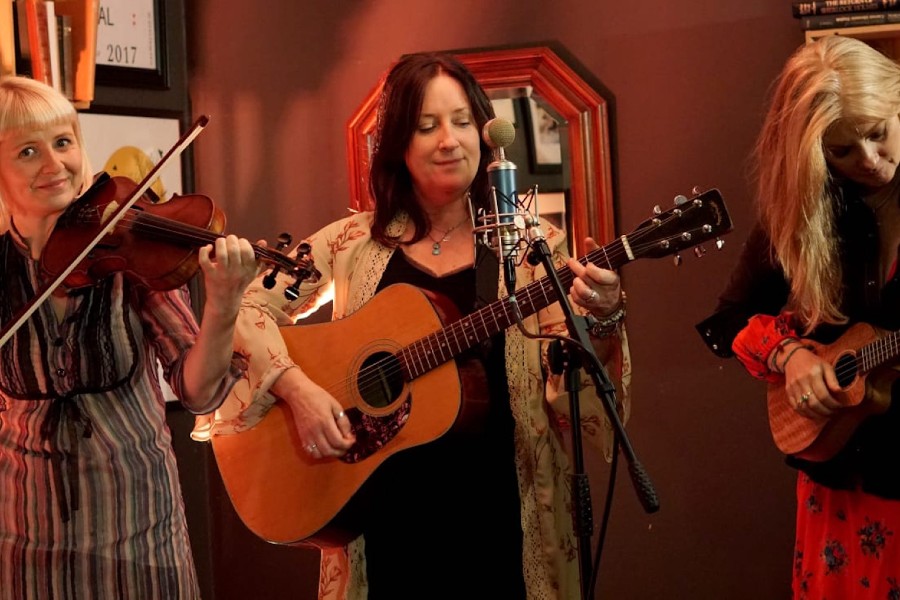 When three extremely well-regarded folk musicians came together to form The Raines, great things were bound to happen. Next up is the new song ‘Barefeet On Grass’ that showcases their infectious sound.

Formed after a meeting on Inis Oírr, off the West coast of Ireland, Yvonne Tiernan, Ruth Dillon and Juliana Erkkonen, all talented musicians with eye-opening resumes, the idea to form The Raines was born. The chemistry was instant and fans are going wild over the mix of vocal harmonies, rhythmic strings, honest lyrics with a bit of unexpected Americana added to the mix.

‘Bare Feet On Grass’ was recorded in the Black Gate Studio, Galway engineered by Liam King. The award winning producer Brian Masterson famous for his work with The Chieftains, Van Morrison, Willie Nelson and The Bothy band, to name just a few mixed and mastered the track.

One look at the background of the women of The Raines and it’s hard not to be impressed. Yvonne (vocals/banjolele) also sings and has toured with The Chieftains, Ruth (vocals, guitar, ukulele) toured and recorded with the legendary vocalist Dolores Keane, is a former member of The Molly Hicks, and has three solo albums of her own, and Juliana, also a former member of The Molly Hicks (fiddle and vocals) has been at the fore front of the Americana musical scene in Ireland, where her fiddle playing has won over many a fan.

Written on a gloriously sunny morning during lockdown while swaying barefoot on a hammock in Connemara, this song focuses on some of the brighter moments that the band spent with their respective families, and the beauty they experienced in the world around them. It offers a glimpse of optimism and hope in the continuing uncertainty throughout Ireland. As is true of all songs by The Raines, ‘Bare Feet On Grass’ is awash with beautiful strings and harmonies, underpinned with lyrics will make you stop in your tracks.

“We are excited to release this song as introduction to The Raines sound but also as an uplifting reminder of the moments that have meant most during lockdown” commented Yvonne Tiernan from The Raines.

Barry Egan, from the Independent.ie, said in a recent review, “The Raines put me in mind of something from Bob Dylan’s Rolling Thunder Revue from 1975 – particularly with the parts with Scarlet Rivera on violin opposite Bob – meets an edgy Emmylou Harris…”

‘Bare Feet on Grass’ is out now across all of the major digital platforms.