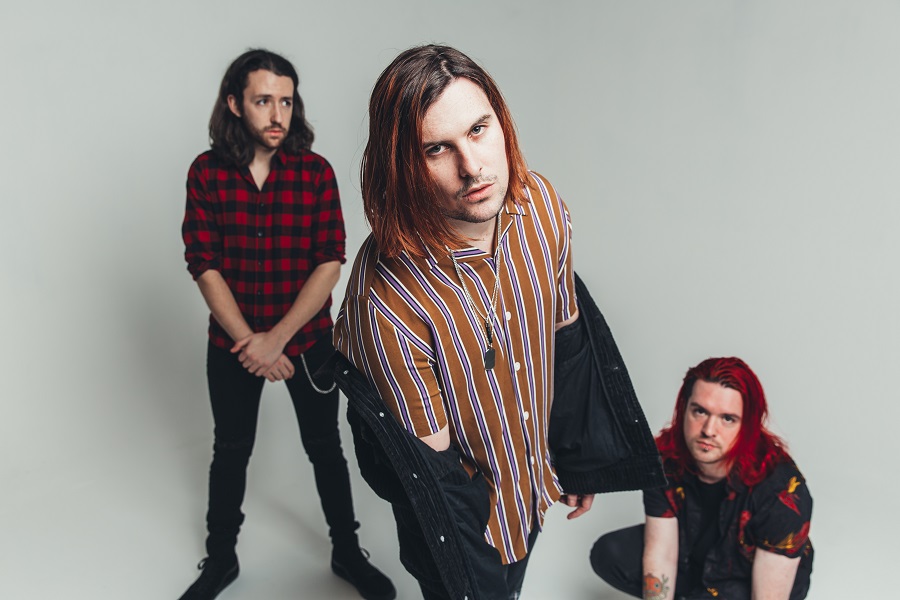 So much of the best art, the best music, is exorcism, primal scream, raw and brutal honesty. The act of gathering up all of your fear, paranoia, addiction, love and despair and hurling it into a microphone, ripping it out of a guitar. Just such a record is Fangclub’s second album ‘Vulture Culture’, an emotional maelstrom of violence, mental illness, suicide, social vampirism, drug overdoses and not a little romance, howled out in some of the most infectious and visceral rock music of the decade.

‘Vulture Culture’, was recorded during an isolated, month long stint at Giant Wafer Studios in Wales with producer duo Alex Loring & Tom Andrews, that tested and toyed with the band. “We always work best in isolation,” says drummer Dara Coleman. “I jokingly went into it saying ‘I’m willing to lose my mind for this album’. Around day twenty, things started getting weird – I started getting paranoid that everyone in the house hated me.”

“There was a real atmosphere of obsession from everybody,” adds Vocalist/Guitarist Steven King. “It’s the craziest thing I’ve ever done. The theme of the album became violent, there’s a lot of violence in the tone of it, towards yourself and other things.”

Steven forced himself to write his lyrics at the last minute, to ensure they were as raw and honest as possible.

“It comes off as a heavier record because I didn’t have time to hide the real stories. It really captured something. The pressure added to it, like ‘that line’s pretty revealing but I have to put it down, I don’t have anything else’. We could’ve gone in and made another debut, this punk thing with loads of hooks, or I could back myself into a corner. It’s a strangely revealing and personal album but I don’t feel afraid to share it because it’s almost as if I’ve expelled the things.”

Woven into ‘Vulture Culture’s broader sweep – obsessive love songs (‘Kingdumb’), and commentary on the carrion concerns and internalised violence of the new generation (‘Viva Violent’: “people are so violent to themselves, the way they talk to themselves, they’re living a life of violence inside, mirroring the reality of what it’s like outside,” Steven says) – are some of the most revealing confessionals in recent rock memory. From the epic, slow-burning opener ‘Last Time’ (which is made up of extracts from a confessional note that Steven wrote his girlfriend, which he sang to her in a lamplit studio) to ‘Heavy Handed’ and ‘All I Have’ which confront the mental health & substance problems that have tormented Steven and close loved ones, the album ebbs and flows with a common narrative.  Tracks like ‘Slow’, ‘Nightmare’ and prowling first single ‘Hesitations’ – featuring a children’s choir – hint at suicidal thoughts, addiction and intense paranoia. “I was completely erratic,” Steven says of his darkest moments, “I was paranoid I was being followed. I had this doomlike feeling every day that something was coming to get me.”

In summing up ‘Vulture Culture’ , Steven says “We are so proud of this record.  It’s a culmination of a lot of chaos and inner mental violence which almost capsized the band.  Making this record got us through the fog and we have a new lease of life.  The energy is real, the chaos makes sense and the violence is fuel for the fire.”