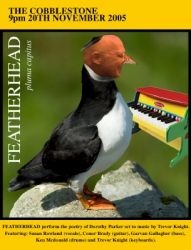 Featherhead is a group/ umbrella name for a series of projects / gigs being instigated by composer/ musician Trevor Knight (Auto da Fe, Philip Lynott band, Paul Brady, Mary Coughlan, Juliet Turner, Roger Doyle, Camille O’Sullivan and many more) Since 1990 he has concentrated on writing music for theatre (more than 40 productions) including world-wide success with Catalpa (by Donal O’Kelly)

Featherhead (the band) will be performing at The Sugar Club, Leeson St. on Sun 11th December at 9pm. Tickets Euro 15.

The inspiration for this first concert will be the poetry of Dorothy Parker, which has been set to music by Trevor. The music incorporates many styles, such as vaudeville- rock, circus- jazz, electronic-folk. Dorothy’s acerbic wit will be transformed and hurled into the 21st century. This follows on from a highly successful theatrical show called “Just a little one” based on 3 of Dorothy Parker’s short stories which was directed by Trevor and performed at this year’s Kilkenny Arts Festival and included 4 songs which form the basis of this new show.