FEATURING X | ‘More Than You Can Chew’ single released 16 April

“More Than You Can Chew carries a vague cryptic message that we’re still trying to figure out.” – Dara Farrelly, Featuring X 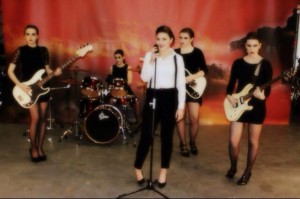 Launching their musical career in 2013 at just 16 years of age, Dara, Niamh, Jenny, Sarah and Eleanor has received critical acclaim with the release of their debut three-track EP (2013) and their impressive twist on Rea Garvey’s single Wild Love (2014) accompanied by their nostalgic music video which paid homage to Robert Palmer’s ‘Addicted to Love’.

The audio crafting quintet are now set to release new material throughout the year showcasing the band’s updated sound. More Than You Can Chew is taken from their forthcoming EP due for release this summer 2015. The official video for the new single will showcase footage of their forthcoming documentary which follows the quartet from the rehearsal room, to the studio and then the stage.

Lead singer Niamh Sharkey, explains the bands slight change in direction; “Launching ourselves at a young age and with a variety of influences; we feel it has taken us so long to find a style that suits us. We have been endlessly writing new tunes and find it’s getting easier to write as we get older and experience life. We have a lot of new material to release this year. More Than You Can Chew represents our fresh sound and feel this song holds the new vibe we’re going for. We plan to release two EP’s this year, and excited to hear the feedback!”

Drummer, Jenny McKeown adds; “The best thing about More Than You Can Chew is although an upbeat song, one you can dance to, if you listen to the lyrics you will hear it’s in fact a sad song. Although we feel it’s best not to reveal the true meaning of the song, as it allows people to relate to it individually and connect with the song themselves, isn’t that what music should be about? We also have a cool video in final stages of production and we can’t wait to share it. It’ll be randomly posted one day, that’s how we roll”

Now all 19 years and about to complete their first year at University, where the girls study a range of subjects from Film in IADT, Law and Languages in DCU to Sports, Exercise and Enterprise in DKIT; Featuring X have been quietly working on a number of projects for 2015 including a full documentary release this June.

The documentary follows Featuring X from their rehearsal room, to touring with The Strypes in December and capturing the E.Ps’ recording process. It also allows music lovers to “get to know” the girls that form Featuring X while following the full production journey from team meetings, rehearsals, photo and video shoots to their private lives. It also visits the topic of why Featuring X decided to opt out of their UK record deal.

After a busy yet successful 2014; with the release of their Wild Love single, being selected out of 800 bands for the Guinness Amplify outdoor advertising campaign across Leinster, playing a number of gigs and festivals across the country; also supporting Swedish rockers Thundermother, and Cavan rockers The Strypes the girls continue to learn grow and have fun with their musical career.

Tags: 'More Than You Can Chew', Featuring X