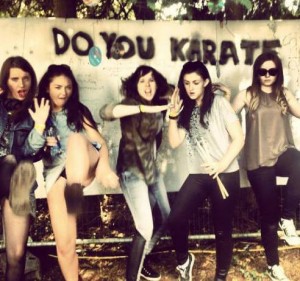 Life has been hectic for the five students who returned to the classroom after a hugely successful weekend gigging at this year’s Electric Picnic.

So much so the Louth rockers announce that two of their original tracks ‘Jekyll & Hyde’ and ‘The Boat’ have been included in “New Irish Music” for the re-release of  Fade Street via Netflix USA.

While sitting in their classroom, the quintet decided to release their new video for radio-friendly track ‘The Boat’ to their fans and followers with a simple message:

“Thank you to all who have supported us through this crazy 2013! We have worked really hard and now getting ready to knuckle down for our exams here is our new video for ‘The Boat’ edited and filmed by Chris Walshe”

“The Boat video is definitely different to our first music video for One Too Many Times (OTMT), while we had so much fun filming OTMT we felt that we needed to follow up and show how we are skilful musicians that can take it seriously despite being teenagers. We want our music to shine through on this one so we went for simple black and white style” says lead singer Niamh Sharkey.

Promising fans, new followers and listeners that a final 2013 studio visit in October is confirmed, Featuring X remain tight lipped about their upcoming trip to NuMu Productions Kildare-based studio where they will record a single for 2014 release (no date as of yet).

“We are so excited going back to the studio; we love it there. Although this time we need to bring books to study at night! We have a single to record and this is going to be a biggie for us.” ads lead guitarist, Dara Farrelly.

The Louth rockers released their first ever music video for the fan-favourite track  “One Too Many Times” in July. Despite receiving mixed reviews the girls stand by their witty video which was loved by their young audience.

The best has yet to come.