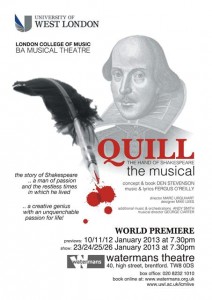 A new musical – ‘Quill – The Hand of Shakespeare’ is to be staged by the London College of Music, of the University of West London in Watermans Theatre, Brentford, from the 23rd to 26th January.  Brainchild of Den Stevenson, the English playwright, the innovative musical has a major Irish involvement, with the music and lyrics being provided by Fergus O’Reilly, domiciled for many years in Leap,West Cork. Fergus, who hails originally fromSligo, was born into a theatrical world, with his late father a cinema / theatre manager who later became a cinema owner.

His late aunt Ita Sloan was the distinguished pianist on RTE’s ‘Live at Three’ in the 1980s and co-wrote ‘One Day Love‘  – Ireland’s 1971 Eurovision entry, sung by Angela Farrell. Fergus played with rock & roll bands in his early days and enjoyed real success when he released records with various labels, including Polydor (later Polygram) inIreland. One of his songs ‘Hello’ representedIrelandon an international radio series ‘International Pop Jury’ and was voted 7th out of 18 songs.

Fergus also won two major prizes in the 1980 Cavan Song Contest, with his composition ‘The Cavan Beggar-man’ Some of his recordings also charted in theUKat the time, where he toured extensively. Whilst Fergus’ name today is synonymous with providing quality music gigs in clubs and pubs throughoutWest Cork, he has been writing songs for years and recording his own work in studios used by such heavyweights as Led Zeppelin and Andy Fairweather-Lowe. He has always had this ‘mad dream’ as he calls it, of writing a musical, a dream which has now come true.

He has spent long periods over the last 15 years working on the music for ‘Quill – The Hand of Shakespeare’ – ever since the concept was first devised by Den Stevenson back in 1997. Initial reviews at rehearsals have been most positive.

The fact that the project has reached this stage is success in itself for Fergus, but the possibilities for the musical are limitless, particularly with the incredible team involved, all of whom are most accomplished in their respective fields. Apart from Den Stevenson  and Fergus, the production team involves Marc Urquhart as Director, whose name is long associated with musical theatre inLondon, Andy Smith, musical arranger and George Carter, musical director. Costume designer is Mike Lee and Jean Diamond is the efficient agent. The rehearsals have been going extremely well and four Irish actors are in the cast, with Nicole McBride from Larne, Co. Down particularly ‘turning a few heads!’.

Fergus O’Reilly has enjoyed the huge challenge involved in creating the music to complement the story of the life and times of William Shakespeare, which could easily become the next big musical in theWest End.