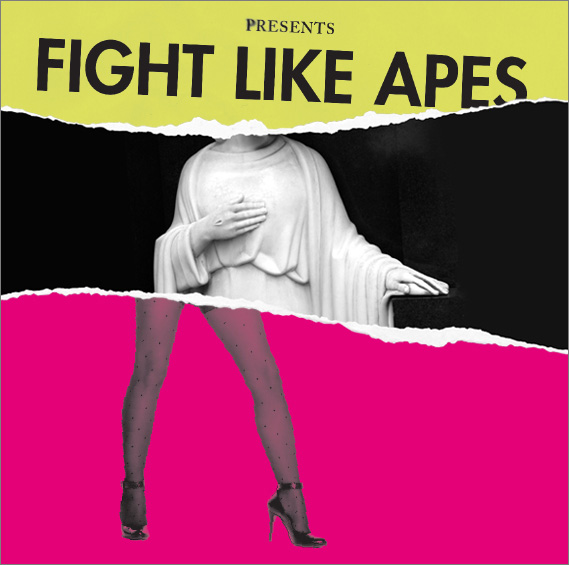 “Please accept our sincerest apologies, sue Mum & Dad”
from 'Come On, Let's Talk About Our Feelings' by Fight Like Apes

To solve the mystery of the golden medallion (turns out it was Mr. T all along…), Fight Like Apes put the tour into Tourette’s and dragged their sorry simian asses all over the world, from New York to Newcastle, Berlin to Benicassim. Rings were wrestled in, wrongs were righted.

200 shows later, the band came back to Ireland. Furniture was moved around, FLA dropped a shoulder, threw a dummy and knuckled down with vim and vigour to work on new songs in a North Dublin garage. Thumbs got split, chicks got lit, as they sculpted dirty great big black chunks of noise with synths, fuzz pedals, hammers and oxyacetylene torches.

FLApes decamped to London to work with producer Andy Gill (Gang Of 4, Futureheads, Young Knives, Red Hot Chili Peppers). Here, hidden behind the street traders of Leather Lane; the new Fight Like Apes long player, entitled Fight Like Apes: The Body Of Christ And The Legs Of Tina Turner was kicked and screamed into being. Played live in the room. Black, no sugar.

FLA: TBOCATLOTT (as it is surely destined to become known) sees our intrepid sonic stevedores sink deeper and darker into the treacly tar pits of their collective dank and fetid imagination.  Here Indie Monsters are called out and slain, limbs are severed. Puke stained lipstick smears tell of your ice cream demise, as elsewhere hookers' victims politely remove their brains. Diamond hard tunes with pitch black rhymes and ridicule – Fight Like Apes take the tumescent cadaver of 21st century pop and hotwire it with a million volts of electro-punk therapy.

Like a snotty kid poking a dead crow with a shitty stick; or a scabby knee that you just can't help but keep picking at; these are scenes from the A&E at the end of the world, and Fight Like Apes are open for admissions.

The lead single Hoo Ha Henry was released in all the usual download places on August 20th and Fight Like Apes: The Body of Christ and the Legs of Tina Turner releases in stores and online on Friday August 27th. All releases are on Model Citizen Records.