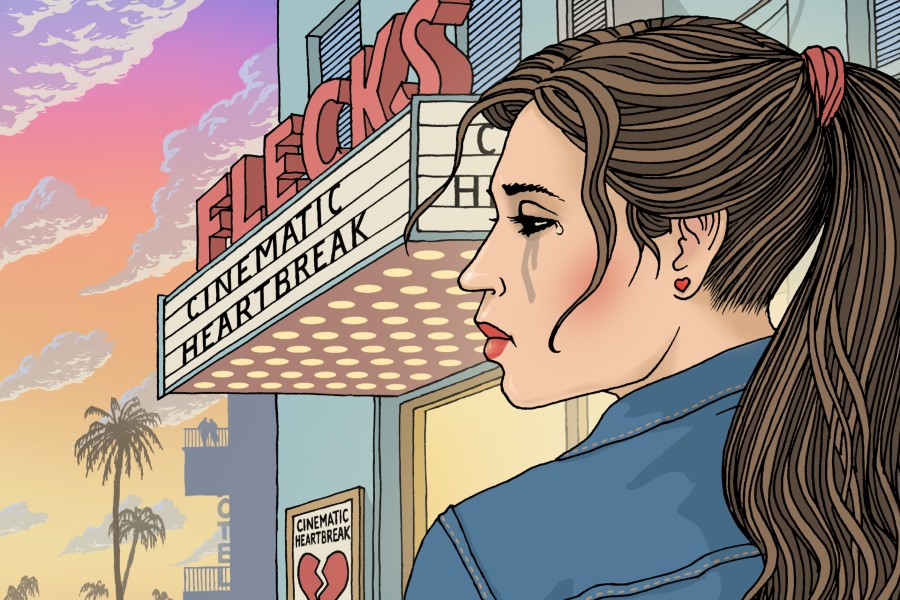 On June 28th, Flecks will release a brand new single called ‘Cinematic Heartbreak’. ‘Cinematic Heartbreak’ is a story of love and conflict between two characters called Red Eyes and Big Lies and how they try to navigate their lives through heartbreak and their increasingly distant worlds.

Flecks continue their love affair with big synths and drum machines in what they consider to be their catchiest, most poppy song yet. The eye-catching illustration for the single is by David Rooney with animation by Karen Kelleher. Flecks will be releasing the animation as a teaser for the song in the coming weeks.

Flecks are Freya Monks and Scott Halliday, a synth-pop duo from Dublin. They have been writing songs together since 2012, sharing their love of writing and production. 80’s movies, classic synth-pop and dark, atmospheric film scores heavily inspire their music.

In 2016, Flecks released their debut EP entitled ‘Girl’, which was recorded, produced and mixed in their studio in Dublin. It was greatly received, gaining national radio play and landing a placement in RTÉ’s thrilling drama ‘Striking Out’, with their track ‘Objects of Desire’.

2018 saw the release of their most popular song to date: ‘Samurai’. Which is a song about growing up in a gang of friends, mischief, bravery, becoming a warrior in your own life by standing up to people and things you’re afraid of.

Since the inclusion of ‘Samurai’ on Spotify’s New Music Friday UK playlist in 2018, Flecks have gained and continue to gain a steady following and listenership.

In 2019, their follow up to ‘Samurai’ was the dark and mysterious ‘Doubles’ written about secret lives and star-crossed lovers. ‘Doubles’ was chosen to feature in a worldwide ad campaign for global brand Estée Lauder.

2020 has already seen the release of several new singles including ‘You Bet I Would’ and ‘Hold On’ both of which have been very well received by both Irish and International radio including play listing on RTE Radio 1.