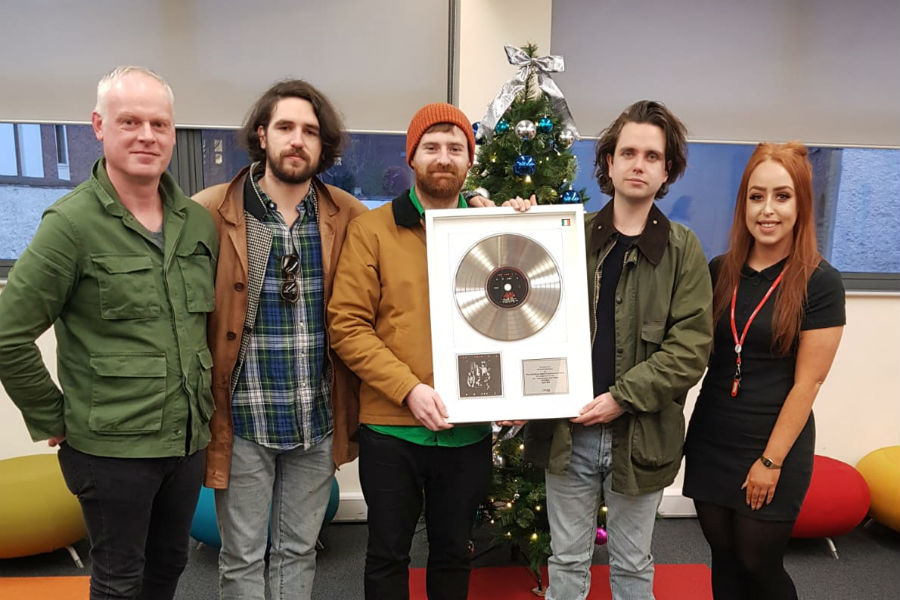 IMRO welcomed Fontaines D.C. to IMRO HQ today for the presentation of their IMRO Award in recognition of their album ‘Dogrel’ ahead of their sold out Vicar Street dates.

Fontaines D.C.’s critically acclaimed debut album ‘Dogrel’ was released in April through Partisan Records and has gone on to be named BBC 6 Music Recommends Album of the Year and Rough Trade’s Album of the Year 2019, as well as reaching No.1 on the Irish Independent Charts.

The band have toured extensively over the last year and a half supporting IDLES on a sold out 30 date US tour and Shame on their last UK tour as well as selling out their own EU and UK headline tours in December 2018, January 2019, April 2019, September 2019, November and December 2019 with many 2020 dates already sold out.

Whilst on tour in the US the band played in session on the legendary The Tonight Show with Jimmy Fallon and also performed in session a second time for long-time supporters KEXP.

Over the last year, Fontaines D.C. have released six critically acclaimed  singles, all of which garnered considerable support both from radio, with the band A-listed at BBC Radio 6 Music for their last single ‘Boys In The Better Land’, and from a vast range of international press, with the band featuring in a number of end of year lists as well as receiving high praise for their debut album from the likes of: Pitchfork, The Guardian, The Times, NPR, Rolling Stone, Q, NME, The FADER, Time Out, DIY, The Line of Best Fit, Loud & Quiet, MOJO, Q, Dork, Clash, Gigwise, So Young, Stereogum, Paste and many more.