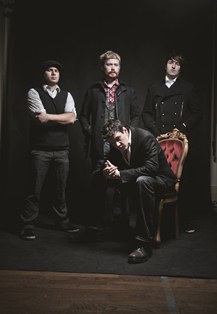 Fox Jaw Bounty Hunters from Limerick City, Ireland, announce a string of Autumn tour dates and release their brand new single 'Strip The City' taken from the critically acclaimed debut album 'The Devil In Music'. Embarking on a national tour in their home country, they also travel across the pond to Toronto's Indie Week International Showcase Festival 2011.

Fox Jaw Bounty Hunters are pretty much a well oiled machine by this stage. Fresh out of the studio at the beginning of the year, they have since released 3 singles, released the highly critically acclaimed debut album 'The Devil In Music', embarked on countless tours across Ireland including a quick string of dates in London despite the apocalyptic riots! Many festival appearances including being added to the main stage at Indiependence Festival to share the boards with Editors & Therapy? They were added to the lineup of Guinness Arthur's Day 2011 performing just before healdliner Calvin Harris to a sold out crowd at Limerick's Big Top. They have had their music picked up by Becks Vier for a TV advertising campaign, featured on the cover of Hotpress Magazine, Ireland's premier music magazine, featured on the Jagermeister Freezer Sessions Compilation CD and Tour, was invited on the IMRO Showcase 20th Anniversary tour, countless of airplay, music video broadcasts, radio sessions, interviews, reviews and have made many new fans made along the way, most notably 2FMs Dave Fanning, Dan Hegarty & Cormac Battle. The list goes on and on… And their year isn't even over yet.
Listen to the album online here: http://foxjawbountyhunters.bandcamp.com/album/the-devil-in-music