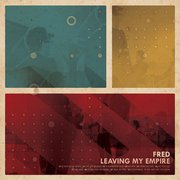 Fred release Leaving My Empire, their fourth studio album on April 15th 2011. Recorded by Producer Howard Bilerman (Arcade Fire) at Montreal's 'Hotel2Tango studio and mixed by Ben Hillier (Elbow, Blur, Editors). The result is Fred's most assured and ambitious album to date. The first single to be taken from the album 'If Not Now When' is out on April 1st.

At the start of November last year the five members of Fred travelled to Montreal to start recording the album. Howard Bilerman invited the band to come and record at his renowned ‘Hotel2Tango’ studio after hearing their demos earlier in the year. As well as recording and playing on Arcade Fire's Breakthrough record ‘Funeral’, Howard has worked his magic with an array of great artists including Wolf Parade, God Speed You Black Emperor and British Sea Power to name but a few.
Fred had spent nearly a year laying low writing, producing and demo-ing the tracks, this would be their first time recording in a studio to tape, eschewing the safety of computers. “We had never really recorded as a group, so it was a leap of faith.” says bassist Jamin O’Donovan "but it paid off, and that natural sound that comes from a group playing together, with all the happy accidents that process brings, is there to hear and brings the album to life".
What emerged was eclectic, exciting, and a contrast to the musical associations people have with the band. There are crests and troughs of tempos and dynamics, multiple vocals, a slew of strings and introspection themes versus brasher pop.

In 2008, Fred Go God Go, which raised their status from cult local heroes to that of an international act. The band’s live reputation increased on the back of constant touring and festivals both at home and abroad, and gig highlights included performances at the Electric Picnic and Oxegen. In 2009, a Hot Press Reader’s Poll of Top Irish Bands saw the band make the Top 10. Fred were also selected for the Top 10 of iTunes Canada’s Indie Spotlight albums for 2008. Their first Canadian single ‘Skyscrapers’ was picked as single of the week and was subsequently downloaded by over 80,000 people.

As a band, Fred have always been hard to place, not just in an Irish musical context, but within a genre. “With the last album, we tried a lot of different things, which helped us learn a lot of different things, so we took all that and decided to make a more focussed and streamlined record,” says Joseph O’Leary (singer). O'Donovan agrees, “We all like such varied music, so it’s great to be able to create something in the confines of a pop song and then try something darker and edgier you feel like it”.

Fred may be uncategorisable, but there are reference points – ‘If Not Now When’ sets out an album that seems to embrace influences that come from the West (America, Canada) rather than the East. Bilerman’s big-drum influence permeates ‘The Life Behind’, where everything pivots around percussion. The faraway echoes of ‘Somewhere Else’, 'Stereoscope’ and ‘As You See’ with 'Stereoscope' being one of the most singular and introspective tracks on the album. ‘Eleven’ is led by vocals that have a Wall-Of-Sound wooziness, building to an epic, insistent chorus. ‘Villains’ opens with dirty bass before transforming into multi-vocal anthemic pop. There's even the nod to ‘70s soul in the form of ‘Fears and Melodies’, which channels ‘Les Fleurs’-era Minnie Riperton and Rotary Connection. ‘Trial By Fire’, an infectious pop-romp has something of a cheer-leading mantra. Along with ‘Villains’, both songs look unashamedly to the past. ‘We Are The City Now’ signs off the album with the same verve and energy that races through all 11 songs. At  the end, what’s left? 11 songs written with heart; rhythms and melodies that are willing to take risks and a band who have finally made the album they always wanted to.

In an age of internet newness and obsession with the next-big-thing, it’s easy to forget that there’s merit in slow-burn. Fred have been together, in various line-ups, since 1999 and their experiments with style and sounds has directly affected their skill in the craft of song-writing. About 'Leaving My Empire' Guitarist Jamie Hanrahan say's “A band’s first and second albums can be like a map for where they want to go. We’ve moved onwards and upwards since the last album; our ambitions and musical desires have changed and grown. We've attempted to create songs that go from intimate to epic and back, and to create little journeys for anyone listening”