Gatehouse Release ‘Heather Down The Moor’ 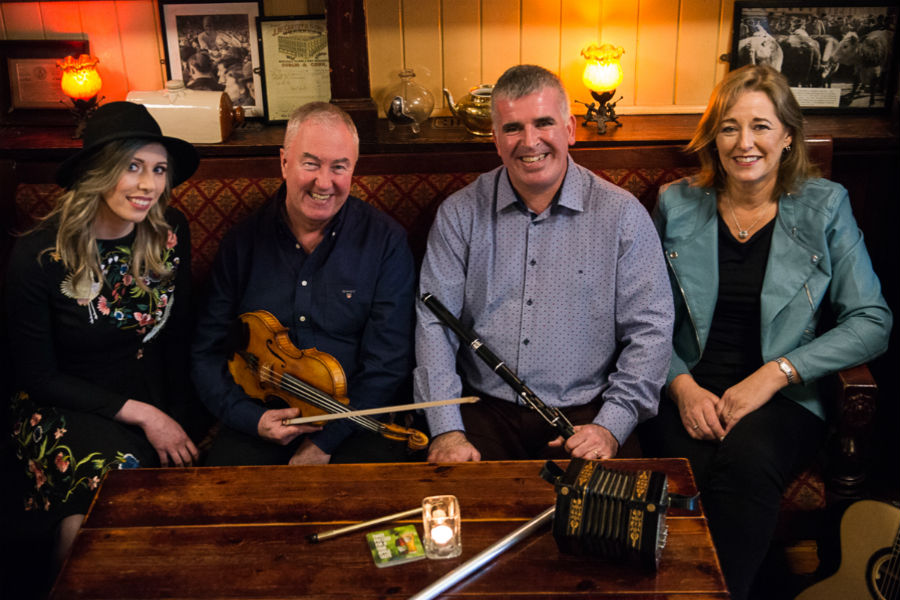 “It is said that music lifts the spirit and this is so true on Gatehouse’s new album ‘Heather Down the Moor’. Garnering their repertoire from the North Connaught tradition, all the tracks are finely paced with the lovely choice of traditional songs in both English and in Gaelic, as in the title track; ‘Heather Down the Moor’, or the wonderful Connemara Sean-Nós song ‘Seán Bán’, interspersed with uplifting flings, hop jigs, a few reel selections, double jigs and barndances, all complimenting one another, making the whole recording a joy to listen to.  The arrangements are sophisticated, but not overdone, which proves how good taste strengthens and enhances the tradition, when done well.” So says Mairead Ní Mhaonaigh about Roscommon based traditional group Gatehouse’s latest release.

Since the release of their critically acclaimed solo album ‘Tús Nua’ in 2016, the band has gone from strength to strength. Receiving a rare 5-star review from The Irish Times – the album was described as “an unerring gem” and “in that elusive ‘must have’ category for years to come”. Internationally famous fiddler Martin Hayes stated that ‘Tús Nua’ was “beautifully arranged and recorded. Everything happening here is authentic.”

On this, their second record, they have presented more intricate arrangements and augmented their attention to detail whilst supplementing their core sound with additional instruments, layers and colours, all adroitly guided by the hand of co-producer Dónal O’Connor. They have assembled some of Ireland’s finest musicians: John Joe Kelly on Bodhrán, Alan Kelly on Piano Accordion, Michael McCague on bouzouki and Conor & Paddy McEvoy on Fiddle & Piano. The band’s members John and Jacinta McEvoy, Rachel Garvey and John Wynne are steeped in traditional music and it’s no surprise that they are sought after to teach and mentor younger musicians at various summer schools all over the country. The Wynne/McEvoy partnership goes back a long while. “Myself and John McEvoy really enjoy playing together and have performed at many festivals and events over the years,” says John Wynne. “In the last couple of years we thought about expanding and developing our sound so we decided to put the group together. We didn’t have to look too far because in addition to myself and John, we had John’s wife Jacinta on guitar and concertina.” When it came to a singer for the group, John McEvoy says: “We asked a young singer called Rachel Garvey to join us. She is also from Roscommon and is an All-Ireland winner in both Irish and English songs.”

The album features new tune compositions from the band’s fiddler, John McEvoy which were created especially for this record. With the tune arrangements the band wished to create an ‘on the edge’ feel hence the new tune title ‘On the Edge’. “John’s compositions give us a unique sound and by osmosis, they seem to fit in the musical style of north Connacht,” Jacinta explains. “There’s a great lift, flow and rhythm to the music of Roscommon. There is great joy and heart in the musical style, I think.” Rachel adds “We chose some English and Scottish folk songs like Heather Down the Moor, The Cocks Are Crowing and The Death of Queen Jane as well as going back to the roots and the source of the singing tradition with the Connemara Sean-Nós songs ‘Mo Cheallaichín Fionn’ and ‘Seán Bhán’. With the Sean-Nós songs we really worked on presenting them in a new and fresh melodic way.”