‘A Country Life’ From The Ginnels 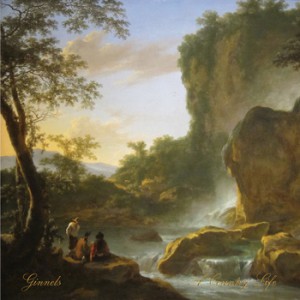 ‘A Country Life’ the 4th album by Ginnels will be released on the 28th of March by both Popical Island and Madrid based imprint Tenorio Cotobade. A launch will be held in ‘The Pop Inn’, a new BYOB space run by Popical Island on the above date.

‘A Country Life’ is also streaming now at both http://ginnels.bandcamp.com & http://tenoriocotobade.bandcamp.com

Ginnels is Mark Chester, Paddy Hanna and Bobby Aherne from Grand Pocket Orchestra and No Monster Club, with Squarehead’s Roy Duffy and Ruan Van Vliet. They describe their gloriously excitable and gorgeous music as “like your favourite Byrds and Feelies records being drowned out by your dickhead neighbour’s stoned ‘noise jams’. Except actually good”.

After releasing two acclaimed releases in 2011, the self titled album ‘Ginnels’ and the mini album ‘Mountbatten Class’ (Long Lost Records), In 2012, Ginnels decided with infinite wisdom to record a 20-song, hour-long, double mess of an album called ‘Crowns’. Following a fantastic reception for the (now out of print) double, with appearances on many end of year lists and many more glowing reviews, the band were approached by Spanish label Tenorio Cotobade in 2013 to put out an LP, ‘Plumes’ comprising a selection of previously released tracks from the first three albums.

‘A ‘Country Life’ is a bit of a departure in so much as it’s the first Ginnels release to involve ‘proper drums’ and also the first non-compilation LP release by the band. Meant from the beginning to be a focused ‘pure pop’ 37 minute album, a direct response to the supposed ‘death of the album’ and an attempt to try and make something shiny and unashamedly not lo-fi, ‘A Country Life’ takes its cues from classic songwriting and a desire to air grievances in public. That said, with absolutely no budget, the drums being recorded in a cupboard and everything else recorded in a 6’x6’ box room, some things haven’t changed.

‘A Country Life’ will be released on Vinyl and (very) limited edition Cassette.