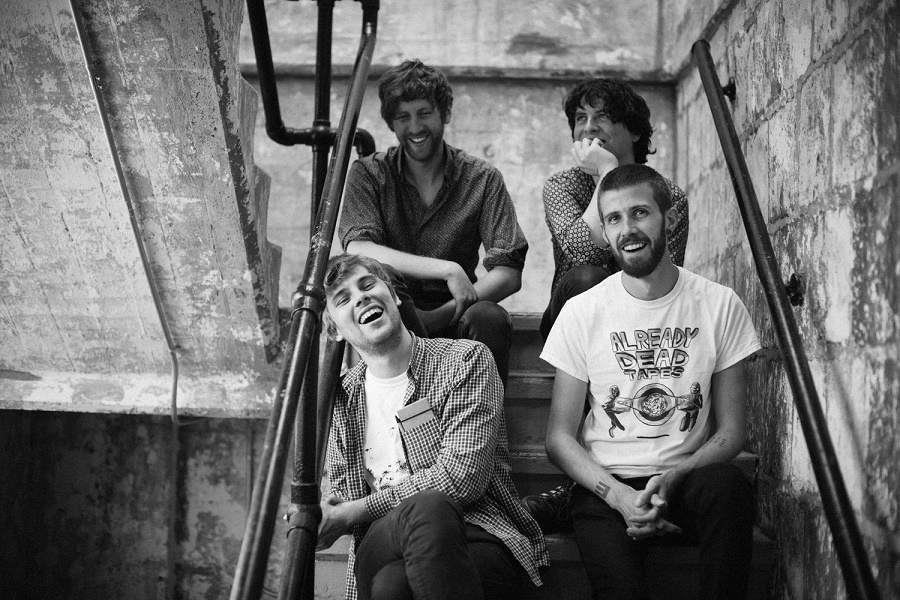 Girl Band are happy to announce their new album ‘The Talkies’ releasing through Rough Trade Records on September 27th, 2019. The album was produced by the band’s own Daniel Fox and will be available on Vinyl / CD / Stream. This is the follow up to their debut album ‘Holding Hands With Jamie’ that came out four years ago almost to the day. The band have also announced a short European / US tour.

The first track to be released from the album is ‘Shoulderblades’. Sonically, the landscape vacillates from a dissonant, distant horizon to a threatening “shh!” in your ear. The dark vocal line groove loops back on itself, building an unsettling momentum, caught up by the chugging snare with the ascending / descending snakes and ladders noise rock guitar that is so distinctively Girl Band.

The video for ‘Shoulderblades’ is directed by long-time collaborator Bob Gallagher, whose previous work with the band won him Best Irish Music Video at the Cork Film Festival and he was nominated for best director at the 2016 Berlin Music Video awards.

Bob on the video “I think it’s a real testament to the creative spirit of the band that they encouraged me to go outside my comfort zone and attempt to make something with no props or set dressing or conventional narrative, and to try and articulate an idea with dance and movement.

In Oona Doherty we found an incredible co-conspirator, I couldn’t imagine any other dancer being able to bring that combination of beauty and violence to the video. The idea grew out of Dara’s reference to the character of Ed Mordake, a man with two faces, so duality was a major theme. It was interesting for me to see how well dance allows an idea to live in the abstract so it can remain very open. It can mean what it means to the band, and also what it means to Oona and to myself. Hopefully that translates in a way that people watching it can find something in it to relate to, strange as it may be”.