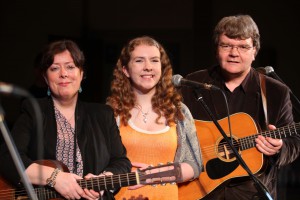 Family trio, GREENSHINE, continue to gather fans and friends alike as they perform up and down the country. Christy Moore said of their album:

“This is a gorgeous album ~ the sound of a family immersed in music, tight in harmony, in love with song.” Now in a new development, Greenshine are delighted that one of Mary’s songs “Meet Me In The Garden” from the same recording, has now been featured in “Waterways”, a new short film made by actress and broadcaster turned film maker, Carrie Crowley. The film is to debut at The Galway Film Fleadh.

“It’s so lovely when the songs go out into the world and take on a life of their own,” says Mary. “That’s the best feeling the the world for a songwriter.”

GREENSHINE are set to play

The Galway Arts Festival, venue to be confirmed,  Sat. 26 July