Iconic Irish songwriters Pete St John and Finbar Furey were among the recipients at the 2015 Lord Mayor’s Awards earlier this week, awarded for their contribution to the life of Dublin city. 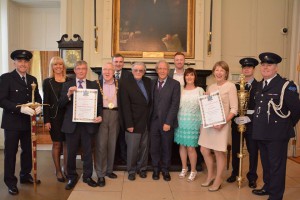 Broadcaster Áine Lawlor and former Dublin football Dessie Farrell were also recognised for their contribution to the city, along with youth addiction service H.O.P.E. Hands on Peer Education and the volunteers of the Inner City Helping Homeless group.

Speaking at the award ceremony in the Mansion House, Mr Burke said “the individuals chosen deserved special thanks for their contribution to the sports, social and cultural life of Dublin, while the two groups had worked tirelessly to help those in need in their communities.”