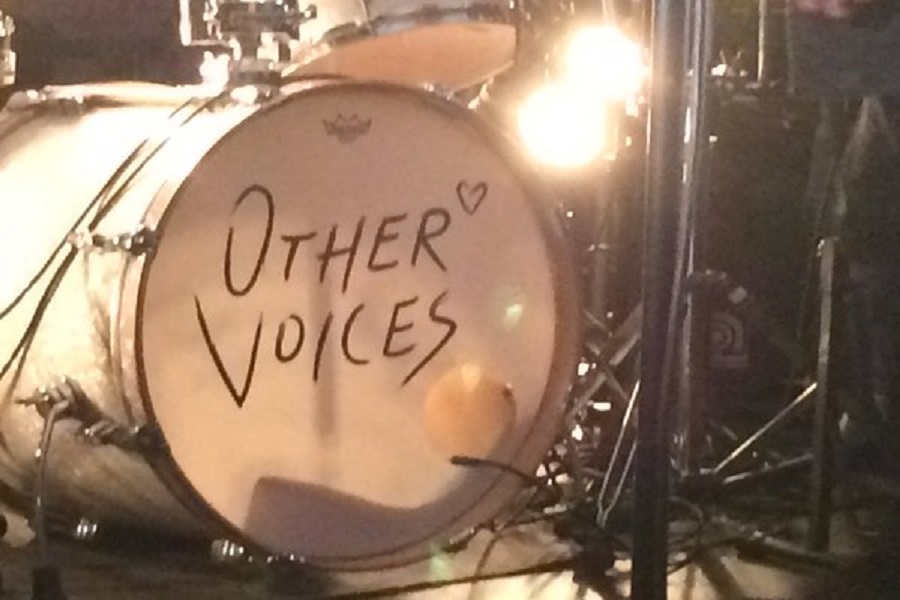 As of writing this report on a sunny Sunday morning, it’s as clear as the nose on my face that the wind has died down, the rain has stopped, and that Storm Desmond has passed into the history books. As for Saturday? Oh, Saturday was almost Biblical.

With the rain pelting down and the wind buffeting us from pavement to gutter and back again, there were a few furrowed brows as to whether the IMRO Other Room marquee would withstand the force of the storm. Located in the back garden of An Conair pub, we can now safely report that the marquee stood its ground, and that the sound of the raging storm (and it really was very angry!) only added to the fine music that was played within.

For the first time of its tenure at Other Voices, the IMRO Other Room performances (which were filmed by the Other Voices camera team for broadcast at a later date) were open to the public, and it’s a serious understatement to say that it provided one of the stretched-out highlights of a seriously good weekend. What perhaps surprised the most was how all of the IMRO Other Room performers (Saint Sister, Talos, Saramai, Hawk, Bitch Falcon, and Gavin Glass) held the audience in the palms of their hands (so to speak).

From relative newcomers such as Saramai to experienced musicians such as Gavin Glass, each act played to their strengths. The result was a full afternoon of remarkably assured music that ranged from the fragile to the ferocious. (And speaking of ferocious, we should say that as all of the musicians played, Storm Desmond continued to make its unruly presence felt.)

Saint Sister (Gemma Doherty and Morgan MacIntyre) started the afternoon with the kind of dreamy folk/pop that in other hands might have had to be uber-weird to get it noticed. Not so Saint Sister’s approach, which subtly blends old-school folk, non-rock instrumentation (that’d be a harp on stage, then) and a gentle delivery of music that warms the heart.

Another believer of how whispered delivery can sometimes be preferable to getting hot under the collar is Cork musician Eoin French. With Talos, the former Hush War Cry member has honed his artistry even further by developing a sparser sound that is typified by tracks such as Tethered Bones, an absolute beaut of a song.

Meath musician/singer/songwriter Saramai has family pedigree in that she is the sister of Oisin Leech, one of Other Voices’ favourites, The Lost Brothers. Initial nervousness was quickly overcome, and Saramai – the winner of the IMRO Other Room open call – delivered a series of songs, including Red Moon and Butterfly Waltz, that made her many new friends, and tipped her as a singer-songwriter to watch out for in 2016.

Another band to keep an ear/eye out for next year is Hawk, a London-based Irish/UK act that perform the kind of sublime post-punk that is equal parts hypnotic and clear-headed. Fronted by Galway singer Julie Hawk, there’s more than a buzz about this band, and it’s easy to see why – the music is powerful, innately melodic and so credibly commercial it’s a shoo-in for success. Hawk’s self-titled EP is released in early 2016, so, as they say, watch this space.

Next on stage is Bitch Falcon, a trio that has been on the receiving end of so much adulation you might have bitch falconthought the band was too good to be true. After only one song, however, you quickly come to understand why they have been praised so much. The music is straight ahead rock/grunge – no frills, little subtlety, but so full of power you wonder whether Storm Desmond will give up trying to batter everyone and just let Bitch Falcon get on with it. In the end, we think it’s safe to say that Bitch Falcon won the arm wrestle.

After such a crescendo of chords, it’s good scheduling to have the final act offer a direct opposite. Of all the music acts here this afternoon, Gavin Glass is (it would be fair to say) the most experienced. And so we get a short set full of wise Americana-hued songs – played to near perfection by a bunch of equally wise musicians – that lend themselves to the tapping of toes and the clicking of fingers. As the camera crews zoom in for close-ups, as the tent coverings flap this way and that, and as the wind and rain continues, the music brings to a close an afternoon that conclusively proves that excellent music arrives in many forms and shapes. Quiet? Loud? All points in between? We’re looking forward to next year’s IMRO Other Room at Other Voices already.

Don’t go yet! As the changeovers in the marquee were taking place, I sneaked out to see a few of the Music Trail acts: Maria Kelly at Grey’s Lane Bistro (sturdy singer-songwriter tunes), Conor Walsh at The Lab (elegant piano/electronica), and Slow Moving Clouds at An Diseart (intriguing folk/trad of the highest order).

And that’s it from me – I’m off now to Foxy John’s for a bag of nails and a Banana Daiquiri. Until next year, Dingle!