IMRO Number 1 Award for The Coronas 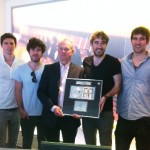 The Coronas popped into the IMRO offices last week to receive their IMRO Number 1 award in recognition of their latest album, “Closer to You”, reaching the top spot in the Irish Independent Album Charts in November of last year. This is the second time the band have received an IMRO Number 1 Award, with their last album, “Tony Was an Ex-con”, reaching number one in the Irish Independent Album Charts in 2010.

The Coronas have just returned from their first tour of Germany and are looking forward to few summer gigs in Ireland in the coming weeks. The guys play Mandela Hall in Belfast on 2nd June, The Marquee in Cork on 15th June and Sea Sessions, Bundoran on 30th June, with a couple of European gigs in between.

The IMRO Number 1 Award was introduced to acknowledge IMRO members who reach number 1 in the album charts here in Ireland or overseas. The Coronas are pictured here at the IMRO offices with IMRO CEO, Victor Finn.