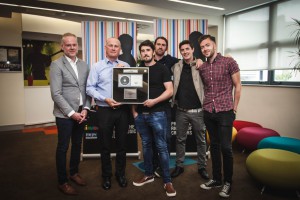 Movement
called into the IMRO offices yesterday to receive their IMRO Number 1 award in recognition of their latest album, “Getting Through”, reaching the top spot in the Irish Album Charts in April.

The last few months have been hectic for the band; signing a deal with Universal Music Ireland, having their track ‘All Works Out’ synced with Discover Ireland advertising and most recently performing at Glastonbury. This summer sees them touring around Irish festivals as well as headlining Vicar Street this October.

The IMRO Number 1 Award was introduced to acknowledge IMRO members who reach number 1 in the album charts here in Ireland or overseas. The band are pictured here at the IMRO offices receiving their award from IMRO CEO, Victor Finn and Director of Marketing & Membership, Keith Johnson.