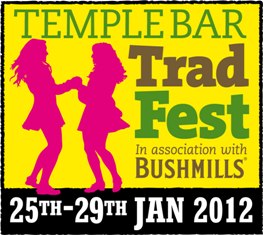 As part of the exciting programme of events taking place at the 2012 festival IMRO will host a series of Traditional Music Showcases and Master Classes in the New Theatre, Temple Bar, over the course of the festival.

Any Traditional Music Groups or Artists interested in performing at one of these showcases should email a link to their website to ei.ormi@esacwohs before 15th December.

Alternatively you can send a CD to the following address:
IMRO Membership Department
Irish Music Rights Organisation
Copyright House
Pembroke Row
Lower Baggot Street
Dublin 2
Temple Bar TradFest 2012
Five days and nights of world class Trad planned for Dublin City from 25th-29th January 2012 including over 200 free events.
Now in its seventh year Temple Bar TradFest is a firm favourite on the festival calendar and brings to Dublin City Centre a real celebration of Irish music and culture each January. Kicking off on 25th January the 2012 programme includes headline performers, a showcase of new Irish musicians and a packed family programme. The Festival programme will feature over 200 free events including free music performances on the two outdoor stages in Temple Bar on Saturday and Sunday. In 2011 60,000 people visited the festival with over 12,000 people travelling from oversees. It is expected that this figure will increase to 70,000 in 2012. The festival takes place over 5 days and nights and features more than 23 venues and over 700 performers.
The 2012 festival will include headline concerts in Christ Church Cathedral Dublin, Dublin City Hall and The Button Factory. Other highlights include over 200 free events, music trail, singers club, open sessions, two outdoor stages, the international Celtic Irish Dance Show, master classes and showcases, gigs for kids, children’s club, cultural workshops, pipe bands and street performers. Audiences can experience a taste of the country in the city as a rural village will be temporarily erected on the grounds of Christ Church Cathedral on Saturday the 28th and Sunday the 29th of January where workshops such as buttermaking and woodturning will take place in traditional Irish thatch cottages, people can also enjoy an animal farm. Audiences should also keep their eyes open for the TradFest matchmaker, rural villagers cycling their high Nellie bikes in period dress and the colourful Wren Boys.

Organised by the Temple Bar Traders association with the support of local businesses in the area this January celebration is set to banish those New Year blues. Full programme details will be announced in the coming weeks. For more details go to www.templebartrad.com
Festival Programmer Kieran Hanrahan explains: “I am very proud of how the TradFest has grown over the past seven years and has become a firm fixture on the Irish festival calendar. The 2011 festival was attended by over 60,000 people who we hope to see increase this year. The 2011 edition of the festival saw a huge increase of international visitors from Norway, Sweden, Denmark, France, Spain and Germany who we look forward to welcoming once again in 2012. Year on year the festival has presented some of the biggest names in Irish music alongside many exciting new performers and musicians. In our headline concerts we have assembled a line-up of some of the most iconic figures in Irish Traditional music coupled with some of the most exciting names in emerging Irish talent. Families will not be disappointed either, with outdoor stages with an emphasis on young Irish music and dance talent; street entertainment and a children’s club are just some of the many free events taking place during the festival. We will also be working in partnership with the Scurlogstown Olympiad who will bring a taste of country life to the city. I have no doubt that people will enjoy a truly exciting celebration of our culture.”
Latest News
ADD TO MQ